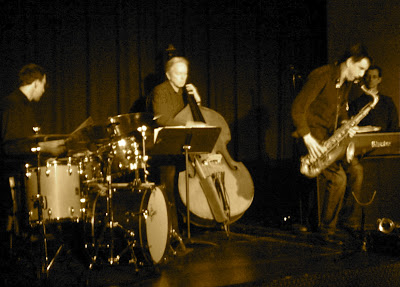 The Art Ensemble of Chicago were one of the gateway acts that allowed me to fully embrace jazz. I didn't feel as if I was sacrificing any of the entertaining elements of popular music when I listened to the loopy, noisy and fun band. The similarly named Westport Art Ensemble, while progressive by Kansas City's standards, was far less outrageous than its brethren from the Windy City.

As Joe Klopus explained in a preview of the event, four of the original five members of the band reunited for a performance Saturday at the Westport Coffeehouse. (Guitarist Jake Blanton is off doing the rock star thing)

I smiled when WAE opened its set with atmospheric AEC-style clattering. In spite of the noisy introduction, WAE sometimes seemed like a mainstream jazz act. Each of its members is respected by swing-obsessed jazz fans. Upon closer inspection, however, WEA frequently features subversive elements that are anathema to traditionalists.

Seeing the guys together again was a treat. I hated to break away from the audience of about 100 after only 45 minutes, but I had to prepare to enter the jungle.

(Original image by Plastic Sax.)
Posted by Happy In Bag at 12:40 PM

You made a good move when you went to the WAE gig - not so much when you bailed to go see G'nR! ;)