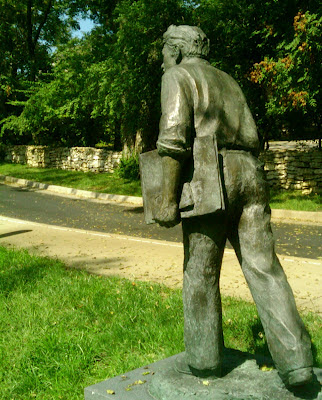 *The namesake of this site is shown at the 1:52 mark in another Buick-sponsored video featuring Hermon Mehari.

*Hunter Long announced that the Black House Improvisors' Collective has been "renewed for another year of residency" with the Charlotte Street Foundation.

*KCTV5 aired a feature about the charitable efforts of Mike Corrigan's Horn Doctor.

*Joyce Smith reports on renovations at the Drum Room.

*Tweet o' the Week: brandondraper- My trio this Friday!-!-! @take5coffeehouse in leawood KS. Leifer/draper/brewer. Gonna get very funky on this session 8pm -free

*Comment o' the Week: Sid- Recording engineer Chad Meise did a masterful job makingan otherwise sloppy band sound good and tight with digital editing. He should have run the voices through auto-tune though. The intonation or lack there of really exposes the mediocrity of the players in this group. Technically the sax solo is not fine. Are you deaf dude?  This might be a good party band but so were the Bay City Rollers.

*From Dan Thomas: On September 20 I'll be releasing an album with my new band Voyage (Me, Wayne Hawkins, Forest Stewart, and Mike Warren) at the Blue Room.

(Original image by Plastic Sax.)
Posted by Happy In Bag at 12:00 PM