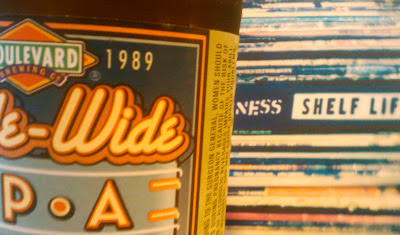 The cover of Hearts of Darkness' new album Shelf Life depicts a delectable stack of vinyl that includes titles by James Brown, Trouble Funk, Sonny Sharrock, Sly and the Family Stone, Parliament, Herbie Hancock, the Neville Brothers and Joe Williams with the Count Basie Orchestra.  The influence of each of those acts is easily discernible on the Kansas City-based band's second release.

Shelf Life represents a significant progression for the large collective.  Although it's an imperfect document of the rapidly evolving band, Shelf Life is a first-rate party-starter by one of Kansas City's premier live acts.

The Bobby Watson jingle associated with Steve Kraske's Up To Date program on KCUR is really hip.  As soon as a savvy programmer claims Hearts of Darkness' brief instrumental "Come Forward" as his or her theme song, however, Up To Date's soundtrack will become the second-best in town.  Longtime fan favorite "Numeration," the deeply funky "Suspicious People" and the unruly "Standing On the Corner" provide additional highlights.  All three songs are superior to the material on the band's 2010 debut album.

Occasional blemishes- a momentum-killing sax solo on the opening track and a couple of unmemorable songs among them- prevent Shelf Life from being the best locally-released album of 2012.  Should Hearts of Darkness continue to progress at its current rate, however, it will soon join the elite ranks of contemporary Afrobeat-related acts like Antibalas.

(Original image by Plastic Sax.)
Posted by Happy In Bag at 4:49 PM

Labels: The Hearts of Darkness, there's hope yet

Who is the saxophonist you refer to in the review? Or are you two Liberal to mention this person by name? I know you don't want to, God forbid hurt anyones feelings. Oh so sorry, I mentioned God too.

Is that close enough Matt?

The Plastic Sax mantra:
An irreverent and opinionated guide to jazz in Kansas City.

How does this band fall into you mission?

I take no pleasure in hurting peoples' feelings, Nigel. Yet I persist.

I don't know who the saxophonist is on the track in question. Technically, the solo is fine. It just doesn't suit the moment.

Recording engineer Chad Meise did a masterful job makingan otherwise sloppy band sound good and tight with digital editing. He should have run the voices through auto-tune though. The intonation or lack there of really exposes the mediocrity of the players in this group.

Technically the sax solo is not fine. Are you deaf dude?

This might be a good party band but so were the Bay City Rollers.

Anon- from a 2009 Plastic Sax review of a Hearts of Darkness show:

Far from a musty academic exercise, the Hearts of Darkness convey the spirit, if not the sound, of Kansas City's heyday. The Hearts of Darkness deserve recognition from the jazz audience because their visceral big band power is the soundtrack to the same exuberant scenes that undoubtedly accompanied the bands of Benny Moten, Harlan Leonard and Count Basie.

I don’t believe in the wider audience theory, I believe in getting better as musicians. Because listeners do have short attention spans, but there’s nothing that we can do to change that. I think that there’s a small percentage of the American record-buying, concert-going audience that has the intellectual capacity to embrace instrumental music. For most people, music for lyrics is going to be what it is, and I don’t believe we can sway them.

Separately, I just think that the musicianship is so bad right now, while instrumentalism is at an absolute high. Guys can play their instruments probably better than they ever could….

The thing that jazz musicians don’t really talk about or want to talk about is that the majority of time when people go to concerts, people are going to see the music. That’s what we do in our culture. In Germany, they go to hear the music, in America they go to see it. If you take the average American person – and this is something that I know from my time with Sting and with Jay [Leno] – people who are going to concerts say, “I’m looking forward to seeing you.” Okay, then you gotta give them something to see! And one of the easy things to give them to see is the fact that you actually like what you’re doing.

Most of the time, when laypeople come to my concerts, they say they just love watching the way we interact with each other in the band. If you go to a lot of jazz concerts now, guys aren’t even interacting with each other.


Hey Matt, feel free to add something intelligent to the vacant, unrelated, right-leaning rant going on.

Wynton, Branford you guys sound like your much less successful brother - Delfeayo, for real. - You keep proselytizing to the masses who by and large do not care for your obsolete takes on "What Music is", "What Jazz is." Please try and keep on topic. I think the review was spot on. Yes there are some intonation problems but the record does capture the extreme energy of a HOD performance and is an accurate portrayal of what the band is all about. There are some killin' moments on this disc, most have to do with a very talented rhythm section that is only gong to get better.