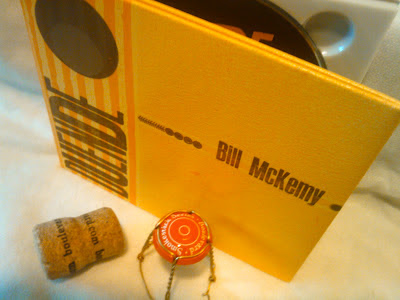 Bill McKemy's Duende may be the most handsome album ever released by a jazz-oriented artist in Kansas City.  It features Peregrine Honig's art and was constructed and individually numbered at Hammerpress.  That's as good as it gets in this town.

The contents are worthy of the deluxe packaging.   Ten years after its 2002 release, Duende has lost none of its luster.  The document captures McKemy (bass), Jeffrey Ruckman (accordion and melodica), Brian Baggett (guitar) and Ryan Bennett (drums) playing exquisitely improvised music.  The best tracks evoke both the arty passion of Astor Piazzola's late-career albums and the progressive Midwestern beauty associated with Charlie Haden.

In addition to creating a sound without geographical boundaries, the musicians seem intent on subverting the concept of time.  Duende's selections range from 37 seconds to over ten minutes.  Most tracks are awash in unhurried languor.  The brief accordion-bass duet on "Shard" provides my favorite moments, but the entirety of the first seven selections are spellbinding.  Sterling Holman adds "effects" on the final track, an electronically treated segment that will be appreciated by aficionados of John Scofield's work with Medeski Martin & Wood.  While worthwhile, it breaks Duende's hypnotic tone.

It's not difficult to imagine Duende being played at a trattoria in Rome in 1980, in a Buenos Aires cafe in 2040 or at a strip mall in Kansas in 2012.  McKemy, Ruckman, Baggett, Holman and drummer Kent Burnham will celebrate the tenth anniversary of Duende with a performance at Take Five Coffee + Bar on Saturday, September 22.

(Original image by Plastic Sax.)
Posted by Happy In Bag at 1:24 PM

I totally agree with your assessment of Bill McKemy's forward-thinking approach to music and this release as leader, HIB. This recording was among those that struck me as deserving of wider recognition when I first returned home to the KC metro to live.