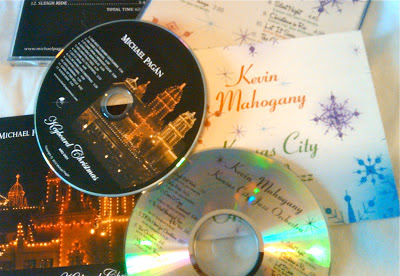 Anyone familiar with both Mahogany and The Kansas City Jazz Orchestra will immediately recognize that the pairing should result in splendid music.  Mahogany, perhaps the most significant male jazz vocalist from Kansas City since Big Joe Turner, is featured on half of The Christmas Album's 14 tracks.  Mahogany's lustrous voice is ideally suited for seasonal material like "I'll Be Home For Christmas."  Yet it's the instrumental selections that stand out.  An evocatively arranged version of "O Come, O Come, Emanuel" is my favorite track.  (Full disclosure- I played an incidental role in the creation of the album.)

Where Mahogany and The Kansas City Jazz Orchestra conform to expectations for holiday music, Pagán approaches the task from a less conventional angle on Keyboard Christmas.  The project's generic title and album art are misleading.  The album isn't an obvious rehash of familiar material.  It more closely resembles a jazz piano album that happens to contain seasonal material than a holiday album by a jazz pianist.

Pagán sets the adventurous tone on the opening track by merging "So What" with "God Rest Ye Merry Gentlemen."  I was so stunned by the pairing that I was compelled to ask Pagán if the concept was original.  He confirmed that the idea is his.  I expect Pagán's stroke of genius to be quickly adopted by musicians all over the world.  The rest of the album is similarly enchanting.  Pagán demonstrates his classical chops on "Good King Wencelas" while an elegant blues-tinged take on "Coventry Carol" evokes Kenny Barron.

While I'm glad to own a copy of The Christmas Album, only a Keyboard Christmas will be added to the small stack of holiday albums that are part of my perennial rotation.

(Original image by Plastic Sax.)
Posted by Happy In Bag at 9:13 PM