The Top Jazz-Related Stories and Trends of 2012 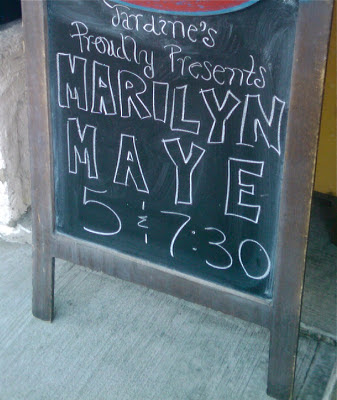 1. Gone for good.
In the early months of 2012 it was still possible to believe that Jardine's, the busiest and most popular jazz club in Kansas City, would somehow be revived.  It didn't happen.

2. Jazz fans abhor a vacuum.
The launch of the Kill Devil Club and a sudden plethora of impressive bookings at Take Five Coffee + Bar have helped to take some of the sting out of the loss of Jardine's.

3. D.I.Y.
Joe Klopus, jazz columnist for The Kansas City Star, noted the trend of jazz musicians booking shows at non-traditional venues.  The dwindling number of actual jazz clubs has compelled many musicians to take matters into their own hands.  Jazz in the Weeds, Tim Whitmer's monthly "Spirituality and All That Jazz" series and the Live at the Hollywood Theater series in Leavenworth are among these ambitious ventures.  Dozens of smaller-scale events are also taking place at art galleries, restaurants, private clubs and on city sidewalks. (Update- see Jim Mair's comment on KCKCC's new Jazz by the Lake series. I simply forgot to mention it.)

4. Things ain't what they used to be.
A Plastic Sax reader regularly commends the Kansas City Jazz Orchestra, Tim Whitmer's "Spirituality and All That Jazz" series and the annul Jazz Carol Fest at Community Church for drawing audiences that range from 250 to 1,500.  He's right to point out those successes.  What he doesn't mention is that the overwhelming majority of the audiences for those shows are in their sixties and seventies.  The turnout for concerts by international stars like Vijay Iyer and Kansas City's progressive jazz musicians is often disconcertingly dismal.

7. Quiet as it's kept.
Bobby Watson was everywhere.  And that's a very good thing.   Watson was a headliner at Live at the Hollywood Theater, was featured at Celebration at the Station with the Kansas City Symphony and served as a guest artist at a concert by the Kansas City Jazz Orchestra,  He also sat in on gigs by artists ranging from Delfeayo Marsalis to Karrin Allyson.  His presence is always welcome.

8. Bravo.
The forward-thinking bookings of programmers at the American Jazz Museum included Gary Burton/Chick Corea and Eric Harland at the Jammin' At the Gem series in addition to many noteworthy artists at the Blue Room.  The museum also made the Rhythm & Ribs Jazz and Blues Festival work under challenging storm-related circumstances.  The 2012-13 season of the Folly Theater's jazz series includes Anat Cohen, Kenny Garrett and Vijay Iyer.  The Prairie Village Jazz Festival and Johnson County's Jazz Winterlude also enhanced the quality of life of area jazz fans.

9. New digs.
The Kansas City Jazz Orchestra's new home at Helzberg Hall in the Kauffman Center for the Performing Arts represents a luxurious achievement for the Kansas City jazz establishment.

10. Empty talk.
Bobby Watson performed at the New American City conference at the Kauffman Center a few weeks ago.  That's as it should be.  Yet prominent displays of lip service can't compensate for the overwhelming indifference the vast majority of the area's populace have for Kansas City's jazz heritage and current artistic renaissance.  A final example- less than a dozen people attended this year's annual service at Charlie Parker's grave at Lincoln Cemetery.  The unsustainable trend must change.

I conducted a similar exercise in 2011.

(Original image by Plastic Sax.)
Posted by Happy In Bag at 1:38 PM

The Jazz by the Lake concert series at KCKCC began. The first Thursday of each month (Oct,Nov,Dec,Feb,Mar,April)

Free 60 minute jazz concert from noon to one. Complimentary good food and refreshments served. The first three concerts were filled to capacity and people stood outside listening. The room is set up with five couches and a fireplace....very intimate and up close and personal....essentially a living room concert held in a cabin. The musicians are paid $125 per person plus lunch and the you can hear a pin drop during the concerts. Standing ovations for our first thee groups. Everette Devan Quartet, Bram Wijnands Trio and Joe Cartwright Trio.

Multiple ages, ethnicities, and a nice mix of students in attendance.

These concerts will be broadcasted on the Wyandotte County Time Warner cable channel via the KCKCC TV station going out to 100,000 homes and will air as a sixty minute jazz concert show with "man on the street" interviews. These will broadcast once a week.

We hope to expand this next year.

Thanks for your comment, Jim. I apologize for my oversight.

The top two bands playing exclusively the music of Basie had a playoff format and the audience members were able to TEXT their vote for the winning band. The texting was worth 35% of there score. This is a first for a competitive jazz festival anywhere.

One of our guitar students received a full ride to attend the Pat Metheny Guitar camp last summer.

Good things happening in KCK! We are just scratching the surface. KCKCC is the place to be!!

Plastic Sax Blog is the most comprehensive (and dare I say objective) commentary on the KC Jazz Scene.

CONGRATULATIONS on a great year covering the music and thanks for your commitment our artist community, HIB!

Happy Holidays to you and yours!

Thanks, Cb. The excellent work of Joe Klopus and KCJazzLark provides me with inspiration.

How about 12th Street Jump? Its now their 4th year sending live Kansas City jazz on the radio waves to over 50 cities across the country every week!