Doug and Lori Chandler: The Plastic Sax People of the Year 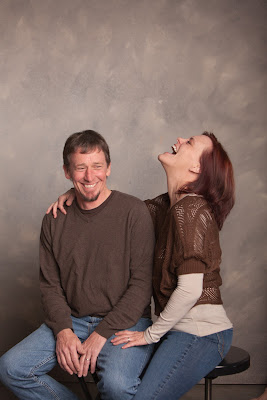 Two of the most valuable people on Kansas City's jazz scene are amateur musicians.  Doug Chandler plays drums.  Lori Chandler is a bass guitar student.  Yet the couple's musical talents have nothing to do with the crucial contribution they've made to the area's live music landscape. The co-owners of Take Five Coffee + Bar are Plastic Sax's 2012 people of the year.

As several conventional jazz venues have shuttered or shifted formats, the Chandlers have provided an increasingly ambitious refuge for the music at Take Five.  The couple spoke to Plastic Sax at their home earlier this month about their experiences since opening Take Five on January 2, 2010.

"It started out as just a coffee shop," Doug said.  "We didn't set out to do music."

Take Five was the site of a fundraiser designed to help finance the European trip of jazz act Diverse in early 2010.  Shortly afterwards guitarist Ron Carlson contacted the Chandlers about the possibility of booking additional jazz performances.  Other musicians, including Stan Kessler, were soon added to the mix.

A jazz venue was born.

"We started taking what was in our business plans for marketing and using that money to pay bands," Lori said.

"We make our money five dollars at a time," Doug added.  "The rest of the business is very important to us but the jazz sets us apart."

The unconventional strategy isn't without risk.

"Some nights it works amazingly well.  Other nights it doesn't," Lori said. "To a certain extent that's how we gauge who is going to come back.  To come back you have to be someone we're really passionate about or make money for us."

Musicians have learned to respect Take Five in spite of its suburban location in southern Johnson County.

"Every time a musician plays there for the first time I have to imagine what's going through their head is, 'I'm going out to Leawood and I'm going to play in a coffee shop'," Lori suggests.  "They get out there and they have a crowd and that crowd is hanging on every note.  And all of a sudden it's cool.  But it takes getting over that 'coffee shop in Leawood' thing."

Audiences have also been remarkably receptive.

"There's something about the intimacy," Doug explained.  "The overall concept of Take Five is we try to make it like your satellite living room.  It's as comfortable as going into your own front room but you don't have to do the dishes. You can be your own host in our place.  That intimacy carries over when we set a band in a corner of the room and someone like Clint Ashlock is blowing his trumpet right in front of a twelve-year-old kid in a comfy chair.  The kid is mesmerized by what Clint's doing.  Parents realize that's something you can't get anywhere else.  They can have a glass of wine yet not feel like they're going into a bar."

"We got super lucky," Lori noted.  "The one thing I would change about the room is the damn pole."

The unfortunate placement of a structural beam seems to be one of the few barriers between Take Five and the area's musicians.

"We look at the musicians like family.  We want to be a place where they will try out things that won't try out somewhere else," Doug said.  "They're partners.  We want them to do well and they want us to do well."

Lori is philosophical about the relationship.

The previous Plastic Sax people of the year are Jeff Harshbarger in 2011, Mark Lowrey in 2010 and Hermon Mehari in 2009.

(Image supplied by Doug and Lori Chandler.)
Posted by Happy In Bag at 12:44 PM

What a perfect choice! Congratulations to Lori and Doug and to one of the finest jazz venues anywhere.

They are as fabulous as the venue they have created! So happy for them both ... truly a gem for jazz!

Congratulations Lori and Doug! And thanks for creating a new music scene, and especially one with the tremendous venue that yours provides to both musicians and audience. And thanks to the outstanding Plastic Sax blog for getting the word out all year long!

Congratulations! Very well deserved! Thanks for fueling the Kansas City jazz flame, and keeping it so vibrant.

Not to worry, Lori. The pole is famous now. Thanks for giving the area another jazz venue. One thing no one has mentioned: They treat the musicians like royalty.

I am a music fan and a BIG Doug and Lori fan. I know the love these two have for music (not to mention each other).
What a thrill to see good people recognized by the world.