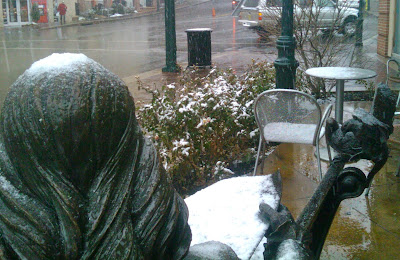 *Eddie Saunders, a longtime fixture of Kansas City's jazz scene, has died.  Here's footage of Saunders performing at the Blue Room in 2004.

*KCJazzLark continues his amusing rebuttal to what he perceives as the unwarranted negativity of the author of this blog.

*A writer for The Kansas City Star recounts a remarkable moment he experienced at the Kill Devil Club.

*Chris Burnett posted a "MIDI Mock Up" of a new composition.  He shares his new resolutions here.

*3 Degrees Above Absolute Zero, a jazz fusion album by Jeff Shirley, was released a few months ago.

*Here's a special request of the management of the brand new downtown venue that refers to itself as a "Kansas City Jazz Lounge"- please watch this site's Jazz Clubbing video.

*Tweet o' the Week: Je Sais Que- Hate when people say "ima put KC on the map". It's already on the map been there for a while because of Jazz and BBQ

*Comment o' the Week: Dean Minderman- Though they now live in Michigan, where Reggie teaches at MSU, the Thomases are from St. Louis, and they're both really good.  Unfortunately, as you probably found out while searching, they don't have a lot of video or audio material available online. The clip of "Unchain My Heart" is fine - I've run it on my own site - but it only barely hints at what they can do.  Marty Morrison and Nick Jost are St. Louis guys, too, both very solid & versatile players. Those four could carry a show on their own, but add in Bobby Watson and Will Matthews, too, and you've really got some potential there. Here's hoping a lot of folks turn up to hear them at the Blue Room…

*From JCCC: Jazz Winterlude will make its annual return this month at Johnson County Community College, again showcasing some of the best jazz musicians around Kansas City and beyond. The two-day festival, which will take place in the Carlsen Center on Friday and Saturday, Jan. 18-19, features Julian Lage, a Grammy-nominated guitarist; Deborah Brown, a world-renowned vocalist and Eldar, a New York-based pianist. More than half a dozen area jazz artists and ensembles also will perform, including the David Basse Orchestra and the Megan Birdsall Quartet. "For us, Jazz Winterlude is all about the music," organizer Doreen Maronde said. "We want students to have the opportunity to work with professionals; we want the audience to sample new things as well as hear their favorites.  And we think the strength of the Kansas City musical community gives us a unique opportunity to do this." The 2013 Jazz Winterlude will be free to audience members, thanks to contributions from community supporters. Seating will be available on a first-come, first-served basis.

(Original image by Plastic Sax.)
Posted by Happy In Bag at 6:13 PM