Displacing the Drummers with Parallax 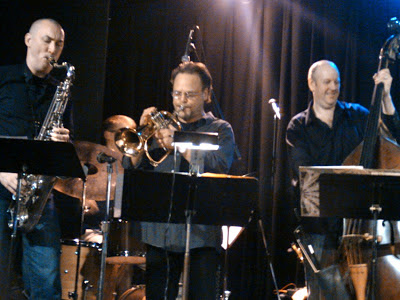 Looks matter.  Unfortunately- even in jazz- it's not all about the music.

I occasionally encounter jazz musicians who act as if they're bored to tears as they perform.  I'm just as turned off when I see guys feigning happiness.  I also know a promoter who's reluctant to book an area jazz act because its members sometimes look as if they just mowed their lawns when they show up for a gig.

Neither attitudes nor apparel were an issue for Parallax at Westport Coffeehouse on Thursday, January 10.  All fifty or so people in the room recognized that the band's music was uniformly excellent.  Parallax honors Kansas City's jazz tradition by adding an intrepid sense of adventure to its solid foundation in mainstream swing.

Trumpeter and flugelhornist Stan Kessler, keyboardist Roger Wilder and bassist (and sousaphonist) Bill McKemy are among Kansas City's most accomplished musicians.  The equally renowned Matt Otto and Clint Ashlock sat in with the band.

Yet Parallax's single most dynamic element was obscured by the setup on the small stage of Westport Coffeehouse.  In young drummers Ryan Lee and Brian Steever, Parallax features two of the most visually compelling musicians in Kansas City.  The tandem's unfiltered facial expressions and kinetic motion are consistently delightful.

Try to spot the drummers in the two photos of Thursday's performance.  Lee and Steever are obscured by the horns and keyboards.  Joe Lovano's Us 5, one of the world's foremost jazz bands, also features dual drummers.  At the ensemble's 2011 appearance at the Gem Theater, the large stage allowed extra spacing so that Otis Brown III and Francisco Mela were fully visible to the audience.  Until Parallax performs on similarly large stages, perhaps it should defy conventional stage plotting by placing Lee and Steever in front.

Lee and Steever must be seen.  Jazz needs their outward expressions of joyful exuberance. 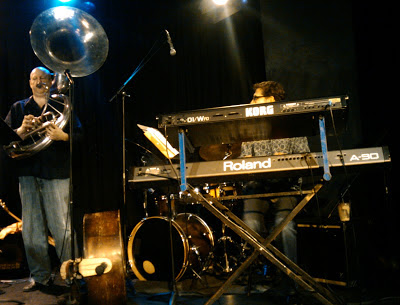 (Original images by Plastic Sax.)
Posted by Happy In Bag at 12:31 PM

Maybe Ryan and Brian should take their shirts off too.

Just teasing. Might be my favorite jazz band in KC at the moment.

It's a small stage - get over it. The music was so utterly fantastic I didn't care one bit about the setup.

Did anyone go to see and hear Joe Lovano's Us5 when they were here? If not, do yourself a favor and YouTube the Lovano group. Is the KC scene this ignorant or stupid that we collectively think this type of on-going aping is original, innovative or new? Come on, we can do better. There are too many high quality artists here to cover the same players over and over and over. Jingoism. Self-congratulating. Leave your UMKC bubble please and grow!

You must be ignorant yourself. Self-congratulating is one of our greatest assets in Kansas City. Come to our gigs. We get applause just for playing the melody and we always clap for each other on the band stand. Its a happy place we live in and the scene is clean.

Anonymous, it is you who reveal your ignorance and stupidity. Do yourself a favor and youtube 38 Special. Clearly, Joe Lovano stole the idea for the instrumentation for his Us5 ensemble from 38 Special's innovative two drum set line-up.

What is with all of the anonymous posts?

Difficult to take their point seriously beyond a point. Constructive criticism is healthy.

And, so are differing opinions in context. Attacks lower the level of any attempted discourse.

All of the above personal opinions about the post are valid.

Keep up the great work covering the KC jazz/improvised music scene, man. Thanks for this blog.