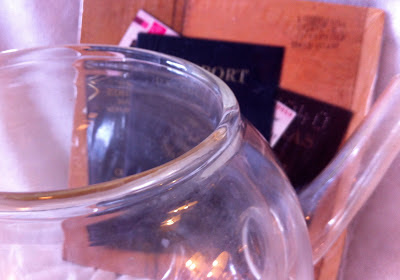 Passport, the self-titled debut album by the duo of guitarist Beau Bledsoe and trumpeter Stan Kessler, is one of the most breathtakingly beautiful recordings to emanate from Kansas City in recent memory.

As its name implies, Passport serves as a musical travelogue with destinations including Argentina, Brazil, Cuba, Portugal, Spain and Turkey.  The tranquil album rewards intent listening but can also serve as splendid background music.  The unadorned arrangements and sensitive playing are exquisite.

Although Kessler is one of the most prominent jazz musicians in Kansas City and Bledsoe is a core member of the Turkish jazz band Alaturka, Passport is not a jazz album.  Yet anyone who enjoys both Andrés Segovia and Sketches of Spain and will appreciate the gorgeous project.

(Original image by Plastic Sax.)
Posted by Happy In Bag at 12:24 PM

Stan has been an important friend and colleague since our student days as trumpeters in the KC Youth Symphony 46 years ago (I look my age, Stan does not). And like I told him recently, he is now at the top of his game and playing better than ever. This is a beautiful CD. (And bravo, Beau.)

Thank you Mr.Sax, I am thrilled that you liked our project so much! Hopefully, it will induce more people to enjoy us live. Mike, you are too kind.