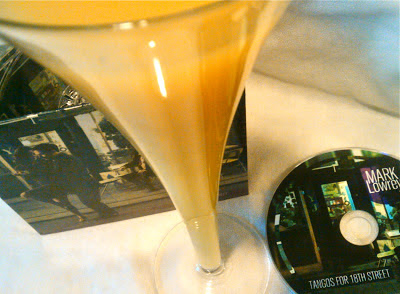 The second track of Tangos For 18th Street serves as yet another example of why Mark Lowrey is one of the elite musicians in Kansas City.  The pianist imbues "Buildings and Mountains"- a minor 2008 hit by the area rock band the Republic Tigers- with a quiet sense of longing.  The sensitive interpretation and inspired song selection reflect Lowrey's seemingly boundless imagination.

Lowrey, Plastic Sax's 2010 Person of the Year, is one of a handful of Kansas City jazz musicians who is embraced by fans of other forms of music.  He covers Radiohead, collaborates with rock bands like Making Movies and has bridged the chasm between two previously unconnected communities with his innovative Mark Lowrey vs. Hip Hop series.

Based on his eclectic track record, some listeners might expect Lowrey's latest recording to be a crossover project in the vein of Robert Glasper or The Bad Plus.  Instead, the tango-themed Tangos For 18th Street showcases Lowrey's meditative side.  Like his 2010 debut recording Live at Jardine's, the new release is a solo piano album.  It's absolutely gorgeous.

Lowrey is a florid pianist.  While the Argentinian accents allow Lowrey to indulge in his romantic inclinations, the album never becomes lugubrious.  The structural ideas Lowrey introduces on Astor Piazzolla's "Taconeando" are worthy of Chick Corea.  He channels Edith Piaf on a lavish reading of the classic "Que Nadie Sepa Mi Sufrir."  The majestic melody of the final track will send listeners scrambling to the album's liner notes.  "Steal Your Mind" isn't a Jimmy Webb or Rufus Wainwright composition.  The line was written by Kansas City-based singer-songwriter and frequent Lowrey collaborator Barclay Martin.

Tangos For 18th Street possesses universal appeal.  The album could be slipped into an octogenarian's multi-disc CD changer between Erroll Garner and Oscar Peterson without distressing the geezer.  Most tracks- particularly the selections that feature deft piano manipulation- would fit seamlessly into a hipster's Soundcloud mix alongside Röyksopp and Leonard Cohen.

Great players transcend categories.  Tangos For 18th Street offers evidence that Lowrey's burgeoning greatness may eventually place him in the upper echelon of the pantheon of Kansas City jazz.

Does he have any plans to sell this online? There's an ominous lack of a "recordings" tab on the website you so kindly linked to. I had similar trouble trying to land a copy of "Live at Jardines." After several unanswered emails and Facebook posts, I finally gave up trying to get a copy sent to me in Seattle. And now I'm whinging on your blog like a moron.

Hi Lee. Send your address to marklowrey@gmail.com. Thanks.