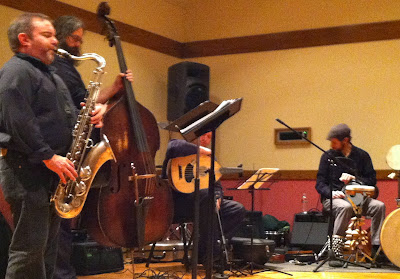 *Steve Kraske chatted with Marc Myers and Hermon Mehari on KCUR's Up To Date last week.  The conversations are archived here and here.

*The Kansas City Star offers a review of the first night of the Jazz Winterlude festival.  KCJazzLarkk posted photos of the event.

*A new review of Mapache, the 2012 album by the Jorge Arana Trio, compares the band to John McLaughlin and Naked City.

*The second half of Demencha's interview with Eddie Moore is here.

*The Black House Improvisors' Collective provides an update on its current session.

*Mark Lowrey's music is utilized in "A Pairing of Cocktail & Song".

*The People's Cathedral of Wavelengths is a new EP by Kansas City's The Great Vehicle.  It's recommended to fans of Steve Morse, Guitar Hero and Joe Satriani.

*Tweet o' the Week: KillDevilClubKC- Hey Friends- who would you like to see on the Kill Devil stage this spring? Nothing is off limits! Except for the Barenaked Ladies.

*Comment of the Week: Anonymous- Did anyone go to see and hear Joe Lovano's Us5 when they were here? If not, do yourself a favor and YouTube the Lovano group. Is the KC scene this ignorant or stupid that we collectively think this type of on-going aping is original, innovative or new? Come on, we can do better. There are too many high quality artists here to cover the same players over and over and over. Jingoism. Self-congratulating. Leave your UMKC bubble please and grow!

*From a press release: Classic Hits & Jazz Standards by Bram Wijnands, Piano & Laura Glaeser, Vocals.  Hosted by Tim Whitmer & The Consort Band.  Wednesday, February 6, 2013. Bram Wijnands began playing piano at an early age in Eindhoven, the Netherlands…  In July 1991, Bram made his debut on the KC Jazz scene at the City Light Jazz Club with Kansas City’s own Richard Ross…  A lifelong resident of Kansas City, Laura Glaeser attended the UMKC Conservatory of Music where she studied Vocal Performance for 6 years… her heart belongs to Jazz and she jumps at every chance to perform it.  Spirituality & All That Jazz.  First Wednesday of every month – 7:00 p.m. Unity Temple on the Plaza… Tickets at the door only - $7.00.  Children under 16 free.

(Original image of Alaturka performing at last weekend's Jazz Winterlude by Plastic Sax.)
Posted by Happy In Bag at 12:41 PM

Yeah I went and saw the Jorge Arana trio recently. It was fun times, no bull-shit. Just self expression mixed with dedication. Fun stuff, recommend.