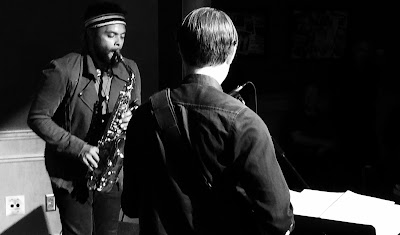 More than 75 people attended a recent homecoming concert by the most important jazz instrumentalist to emerge from Kansas City since Pat Metheny and Bobby Watson became stars in the 1970s.  Logan Richardson didn’t disappoint the gathering of friends, family and fans at the Blue Room on Monday, May 23.

The Paris based saxophonist led an all-star band on Shift, his acclaimed debut for Blue Note Records.  Having spent a lot of time obsessing over the album, it was difficult for me to accept the touring version of Richardson’s band.  Bassist Harish Raghavan was the only accompanist on Shift to join Richardson at the Blue Room.

Raghavan’s playing was just as vigorous as his contribution to Shift and drummer Tommy Crane was an admirable fill-in for Nasheet Waits.  Yet I wasn’t able to forgive guitarist Mike Moreno for not being Pat Metheny.  Pianist Sam Harris managed to make me forget all about Jason Moran.  Harris’ inventive approach corresponds with Richardson’s innovations.

Watching Richardson expand the vocabulary of jazz at the momentous concert reduced the risk anything getting lost in translation.  The most daunting elements of Shift were perfectly coherent at the Blue Room.

(Original image by Plastic Sax.)
Posted by Happy In Bag at 3:23 PM

Call me late to the party but "Shift" is really great. As always thanks, BB.