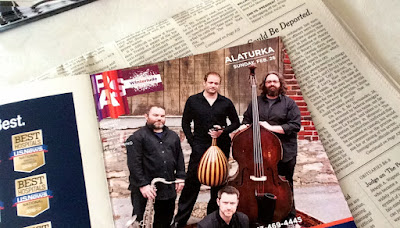 Tenor saxophonist Rich Wheeler opened Alaturka’s concert at Polsky Theatre on Sunday with an incantation that resembled an adhan, the Islamic call to worship.  His conjuring was an exceedingly welcome sound to adherents of the Kansas City based Turkish jazz group.

Alaturka commanded an inordinate amount of coverage at Plastic Sax in the first half of this decade.  Yet the innovative band has been out of commission lately.  Aside from a mention in a review of a 2016 Brandon Draper album, Alaturka hasn’t been cited at this site in a couple years.  About 100 people purchased $20 tickets to attend Sunday's reunion.

Bledsoe joked that he and his colleagues no longer resemble the men in the dated publicity photo on the cover of the program.  Their visages may have changed since the formation of the band in 2007, but the men in Alaturka sound as magnificent as ever.

(Original image by Plastic Sax.)
Posted by Happy In Bag at 10:25 AM