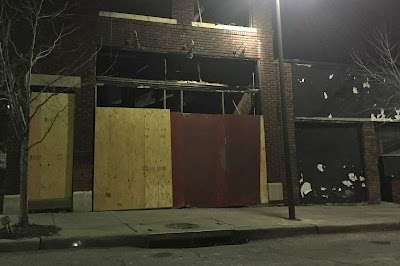 *A television news team reported on the fire that tore through the Jazz District last week.  The Kansas City Star provided additional information on the status of the damaged buildings.

*Joe Klopus previewed a forthcoming Pieces of a Dream concert at the Gem Theater.

*Tweet o’ the Week: Sigrah- Whiskey neat and jazz in a dark KC club with @onhellmusic and @nataliehandslol this is vibes

*From Paul Shinn: We've got a nice run of shows coming up… I've moved back to KC for a month from Colorado until I'll be moving to NYC Feb. 26th… We will have some new original music to play for you all that we recorded in December of 2016. This music was recorded in a quintet format along with Logan Richardson on saxophone and Gabriel Mervine on trumpet… February 16th--Blue Room; February 17th & 18th--Majestic Restaurant; February 19th 2:30-5:30pm --Green Lady Lounge.

(Original image of a fire-damaged building in the Jazz District by Plastic Sax.)
Posted by Happy In Bag at 4:37 PM