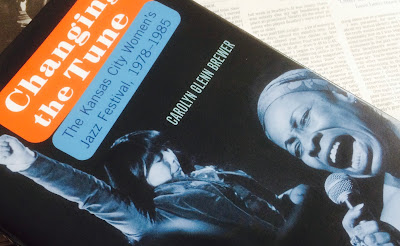 Public indifference. Misunderstandings between musicians and promoters.  Meager audiences.  A lack of institutional support.  Sound like this summer’s ill-fated Kansas City Jazz & Heritage Festival?  Changing the Tune: The Kansas City Women’s Jazz Festival, 1978-1985, published by the University of North Texas Press in March, demonstrates that the problems that plagued the American Jazz Museum’s festival in May aren’t anything new.

Although Brewer’s text is occasionally impeded with unnecessary details- trivia about tedious topics like the high school band directors should have been relegated to the footnotes- she successfully chronicles the trials and tribulations associated with presenting a jazz festival in Kansas City.  (She also provides thoughtful insights into the prejudices faced by women in jazz.)

Every locally based jazz fan will relish the stories about the salad days of veteran Kansas City musicians like Mike Ning, Arny Young and Paul Smith as well as references to bygone venues including the Signboard.  Accounts of the misbehavior of a handful of stars are also salaciously entertaining.

Changing the Tune: The Kansas City Women’s Jazz Festival, 1978-1985 doesn’t merely affirm that history tends to repeat itself.  The book demonstrates that for a large-scale jazz festival to succeed in Kansas City- even if for just a handful of years- it must be a labor of love for a coterie of smart, wholly-committed true believers.