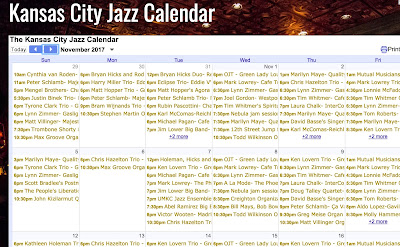 *The Kansas City Jazz Calendar has been resurrected.  The new, improved version of the comprehensive calendar is a community service of Plastic Sax and the Green Lady Lounge.  It’s designed to be shared.  Submissions may be made to williamwbrownlee(at)gmail.com.

*The American Jazz Museum’s financial woes spurred new rounds of wrangling in recent days.  The Kansas City Star, KCUR and KSHB reported on a proposed takeover by the Kansas City Parks & Recreation Department.  The Pitch discovered that the institution paid $18,000 to fly Jon Batiste to Kansas City in April.

*Lee Ritenour’s concert at the Folly Theater was previewed by Joe Klopus.

*Krystle Warren and Chalis O’Neal were interviewed by Joe Dimino.

*Chuck Haddix was featured on the radio program “Here and Now.”

*Tweet o’ the Week: Nikki Clark- We need to SUPPORT the museum to keep the doors open. I don't want to see the city taking over all the businesses on 18th Vine.

*From a press release: Tim Whitmer has been the gracious host and resident pianist since the inception of the Spirituality & All That Jazz program in 1994… Joining him in the celebration will be vocalist and trombonist Kathleen Holeman holding court with founding members of The Consort Band, Jurgen Welge & James Albright, and other party guests including Carl Bender. 7 p.m. Wednesday, November 1, 2017, Unity Temple on the Plaza. $7

*From a press release: ARC recording artist Christopher Burnett and his Quartet will be performing at least once per month on a Friday or Saturday at The Black Dolphin in Kansas City beginning in January 2018… The Black Dolphin is the newest, and the third stage to be featured as part of the Green Lady Lounge.

(Original image by Plastic Sax.)
Posted by Happy In Bag at 8:55 AM

Thank you for restarting the KC Jazz calendar. It is really helpful!