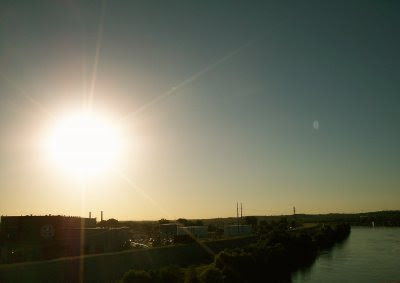 As with many jazz fans, Plastic Sax's path to the music was convoluted.

Kansas City, Missouri's free Sunday night jazz concert series made a profound impact on me. But I also came to jazz via a teenage flirtation with progressive rock by the likes of Gong and King Crimson. That led me to Billy Cobham, the ECM stable, Miles and so on.

James DeRigne played a small role in that process. When I'd visit him at the Record Cabinet, his odd little prog-rock speciality shop on Mission Road (or was it Rainbow?), he'd often have jazz playing in the background. I also vaguely recall a prominently displayed autographed Buck Clayton album.

At the time, I thought it strange that a guy would be interested in both weird European rock and traditional jazz. Now, of course, it seems perfectly natural to me.

Sorry to hear of DeRigne's death.

You use the term traditional jazz in reference to Buck Clayton and others in the past. This is perhaps a bit of a misnomer. When I hear the term I think of the jazz of New Orleans from the turn of the century. Some people would include the jazz music from Chicago from the 1920's. In my opinion, Buck Clayton is more correctly identified as a purveyor of the classic jazz style called swing and later what has come to be known as mainstream jazz.

Thanks for the correction, UL. That was poor wording on my part.