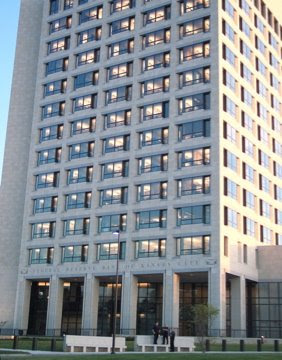 *I suspect the future of jazz looks a lot like this- young, arty, government-subsidized and shared via Twitter.

*All About Jazz enthusiastically reviewed Sons of Brazil's While You Were Out.

*The sequel to the Metheny Music Foundation video "Pages From the Scrapbook" has been posted at YouTube. Additionally, Mike Metheny's hilarious essay on the noise level in area jazz clubs is once again available at his site.

*Carmell Jones is perhaps the most important "forgotten" Kansas City jazz musician. The trumpeter now has an entry at Jazz.com.

*The co-chair of KCRiverFest laments the absence of a 2009 Rhythm and Ribs event.

*Rick Hellman profiled artist Janet Kuemmerlein. He notes that she "has embarked upon a series of portraits of female jazz singers." The series includes the likenesses of Marilyn Maye, Karrin Allyson and Carol Comer.

*John Brewer announces the release of a forthcoming recording project.

*I spotted this text at the Mutual Musicians Foundation's site: August 29: ...is the birthday of Charlie “Bird” Parker. That’s a Saturday and on that day at “The Foundation” there will be 5 special events: 1. MUSICIANS! At 10AM a photo will be taken of all Musicians on the front steps of the Foundation (you remember one was taken in 1999 so this will be a 10 year anniversary). 2. Friends of the Foundation! just after the Musicians photo another photo will be taken of any and all friends of the Foundation (all friends including musicians). 3. FLAGS OF FAME – On each light pole between 18th & 19th Streets on HIGHLAND, banners will be hung and each banner will depict one or two musicians who have been important to JaZZ in Kansas City 4. JAZZ on Stage (you know it will be good). 5. Historian Sonny Gibson bring displays and tell about the life of Charlie Parker. August 30 After the Sunday salute to “Bird” at the Cemetery, all are welcome to come to “The Foundation” for JAZZ and fried Chicken (no entry fee and free Chicken until it is gone).

(Original image by Plastic Sax.)
Posted by Happy In Bag at 6:54 PM

Steve Paul just about always beats me to the jazz punch -- except for ALL. (Click my name.)

What, are my "jazzectives" no good here?

Let me assure you, Mr. Harper, the slight was unintentional. It's just a "search word" issue. Thanks for the link.

No worries, Happy. I just wanted to say "jazzectives."

Good on you for linking to Folsom's blog. He's the man.