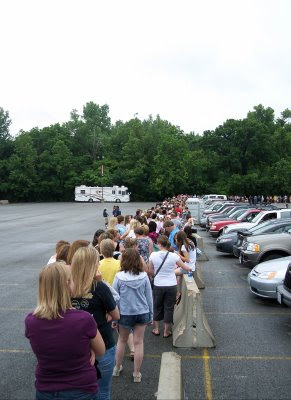 *The Rest of the Story: Jazz History and Improvisation, a manual by saxophonist Alaadeen, was recently published. Here's Bobby Watson's blurb: "With this book, Alaadeen has opened the door to the complex mind of the jazz musician."

*I'm not sure what to make of Tony's Kansas City's assessment of the previous Plastic Sax post. That's ok- I'm not quite sure of what I was trying to say either.

*The reissue of Pat Metheny's One Quiet Night received a good review.

*Yours truly will participate in a discussion about the state of jazz in Kansas City on KCUR's Up To Date Thursday.

(Original image by Plastic Sax. This is the interminable line to enter last week's big jazz pop concert at Capitol Federal Park at Sandstone.)
Posted by Happy In Bag at 8:02 AM

thanks for the nod, PS. i was a little excited at first at the prospect of a reissue of "one quiet night," but it appears that it only has one bonus track...was hoping for a bit more. that disc, and metheny's duet CD w/jim hall are, in my humble opinion, two of the best representations of metheny's talent where it is all about the guitar work. they're not drowned in synths.

i see a pattern here with your photo posts.

And thanks for noticing the photos. I was inordinately pleased to capture the exact same shot at Summer Jam and Red, White & Boom.