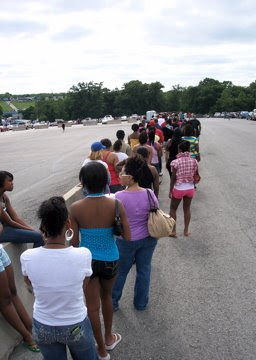 *NPR's jazz blog analyzed the data contained in a recent National Endowment of the Arts study. Here are a few gruesome lowlights: 7.8% of Americans saw a jazz show in 2008; the median age of the jazz audience is now 46; the college-educated jazz audience has dropped 29% since 2002; 7.3% of (18-24 year olds) went (to a jazz show) in 2008. Imagine the results if the contributions of crossover artists Diana Krall, Chris Botti and Michael Buble weren't counted.

*There's no Kansas City-specific content in this item either, but in light of the hiatus of Rhythm & Ribs, I recommend the Los Angeles Times' fascinating study of the challenges related to booking a jazz festival.

*The management of Leawood's Gaslight Grill would like Plastic Sax readers to be reminded that Dixieland artist Lynn Zimmer continues his residency at the establishment.

*Bartlesville hosts Gary Burton and Chick Corea tonight at the OK Mozart Festival. Corea was here three or four years ago but I can't even recall when Burton last played in Kansas City.

*I was surprised to learn that there was a second annual Kansas City Memorial Juneteenth Jazz & Arts Festival last Saturday.

*Kevin Rabas has published a new book of poetry. Jazz is one of the Kansan's frequent topics.

*The 2009-10 concert season of The Kansas City Jazz Orchestra has been leaked via Facebook. Edited slightly for length: #1- "Big Band Meets Hollywood"; September 25, 2009 - Folly Theater ... a fun evening of songs made popular by movies and TV shows from the 40's through today. These memory invoking tunes arranged for a big band will be easy to recognize and easy to listen to. Popcorn provided. #2: "The Best of the Big Bands" January 9, 2010 - Yardley Hall. ... an assortment of hits from legendary big bands such as Basie, Ellington, Kenton, Herman and Goodman. #3: "Sweet Kansas City" April 30, 2010 - Folly Theater ... a presentation of the complete "Kansas City Suite" by Benny Carter, a ten movement body of work... The shows have been added to the Kansas City Jazz Calendar

*Finally, I'd like to thank commenter L.F.B. who took me to task in a recent post. I don't particularly care for his/her tone or negativity but I love interacting with Plastic Sax's readers. I'm grateful to all 17 of you.

(Original image by Plastic Sax. This is the interminable line to enter last week's big jazz hip hop concert at Capitol Federal Park at Sandstone.)
Posted by Happy In Bag at 3:27 PM

i think the photo says it all. and i must have missed the LFB conversation. whoah.

A thousands words, indeed. Thanks, PJ.

Put your head back in the Kansas City sand and ignore everything that ain't from round here. What's wrong with you, trying to spread the word about interesting musicians from out of town.

Regarding Karrin,
Nobody talks at the Folly Jazz Series, Tim Whitmer's Jazz Series,Jammin' at the Gem or the Kansas City Jazz Orchestra concerts.
If you don't want people to talk than don't play in bars. Play concert halls where people come to specifically listen...not drink, not eat etc. BTW, does Karrin still smoke?

Gary Burton played a fantastic show in the middle of Brush Creek near Wornall road during one of the free KCMO summer-Sunday-evening shows in the mid-70s -- with Metheny, if memory serves ... Thanks for the Marilyn Maye link. Gawd, I love that broad!