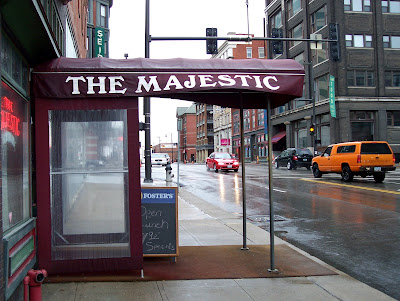 That was the first thing that came to mind when I read that the Majestic Steakhouse was, as the Star put it, gone for good. As is regularly noted at Plastic Sax, the outstanding entertainer is perhaps the single finest purveyor of Kansas City's classic jazz sound. The Majestic's basement, in my mind at least, was his room.

Beyond the misfortunes of Wijnands and other musicians, however, is an even more significant loss. The Majestic featured what most casual listeners and visitors from out of town have in mind when they think of "Kansas City jazz."

Here's an example. While attending Steve Coleman's performance at The Blue Room in April, a very nice couple asked me if the experimental musician intended to "play like that all night." What the pair wanted to hear instead was old-fashioned swing music. It was nice knowing that I could confidently direct them to The Majestic. The likes of The Scamps, Joe Cartwright, Julie Turner and Tommy Ruskin would be sure to please them.

The three primary jazz-oriented rooms remaining in Kansas City feature a much broader stylistic range than did The Majestic. The music offered at The Blue Room, Jardine's and The Phoenix isn't always a natural fit for tourists and convention-goers.

Visitors to New Orleans know they'll hear "When the Saints Go Marching In" in the French Quarter. "Sweet Home Chicago" is played nightly in many of the Windy City's blues bars. With The Majestic gone, a tourist in Kansas City is no longer guaranteed the opportunity to hear a jazz band performing a Count Basie number.