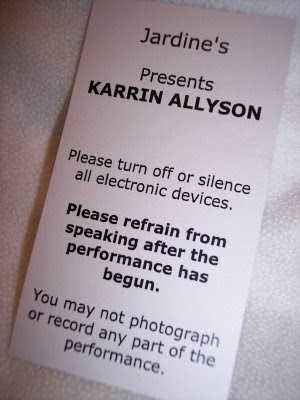 That's the lesson other jazz musicians might learn from Karrin Allyson.

In her case, it has nothing to do with music. As I noted in my review of the first of her four shows at Jardine's last week, Allyson continues to travel down the same musical path.

Much of the coverage and chatter surrounding Allyson's return to Kansas City focused on her reputation as a temperamental artist. I've seen Allyson express displeasure from the stage in the past. But I'm sympathetic- inattentive audience behavior is a recurring topic at Plastic Sax. I was pleased, consequently, when the card pictured here was distributed to Allyson's audience.

Whether her so-called "attitude" is real or not, many people who wouldn't otherwise care about Allyson enjoy discussing her demeanor. The shtick enhances her performances even as it raises her visibility.

Allyson isn't the only Kansas City-related jazz musician with a gimmick. Dave Stephens continues to expand his audience with a manic visual display. The Scamps are marketed as the city's elder statesmen. The McFadden Brothers dance. And don't forget about David Basse's hat.

Many musicians might suggest that their work speaks for itself and that a gimmick would only cheapen their art. Perhaps. But in an environment in which it's exceedingly difficult for a jazz musician to get noticed, I'd encourage them to embrace every possible angle.

(Original image by Plastic Sax.)
Posted by Happy In Bag at 12:36 PM

Let me get this straight. Bill Brownlee is Happy in Bag! Its an honor to meet you and read your work.

Pay no attention to that man behind the curtain!

I guess I disagree. If I were handed that card upon entry, I would take some offense - as though I was a 5th grader attending some event. It's a JAZZ CLUB, folks. Would she be so audacious to hand those out for an appearance at The Midland, The Folly or The Music Hall? I think it's egotistical and not a gimmick at all. (Neither is Basse's hat imo. Just part of his look.) - mt

If you want to see a most entertaining artist with a fantasitc attitude, check out Julia Othmer at Jardine's on July 2. Julia is from KC but now living in LA and Europe. You will her much more of her in the future.

The Folly, the Midland and the Music Hall audiences are quiet because they are not night clubs with food and beverage service to your seat.
If Karrin wants quiet she should play concert halls sxclusively.

Can you start a discussion about jazz musicians with a lazy work ethic. Its visible in their performances and their musical growth.

Karrin is the antithesis of lazy.
She is always trying to improve her craft and her art. Maybe thats why she is not local anymore.
We have some hard working cats in KC but we also have some very lazy musicians too. I guess every city does.

I would be interested to know whether Allyson and/or her people view the artist's reputation as a crowd-chewer-outer and its accompanying warning card as a gimmick, whether they're milking it on purpose.

As far as other gimmicks, don't forget about Bobby Watson's dreadlocked ponytail, not to mention his intractable passive-aggressive hostility toward freemasons.

I understand those perspectives, 6:22 and 1:21. But admission was $35, not including food and drinks. Allyson is worth it, I think, but only if Chatty Cathys don't spoil the show.

I like Julia Othmer, too, Southmoreland. I don't write about her at Plastic Sax or feature her on my jazz calendar, however, because she's not a jazz artist.

Hey, Anon, June 23, 1:26- I apologize for not publishing your comment until now. I just noticed it.