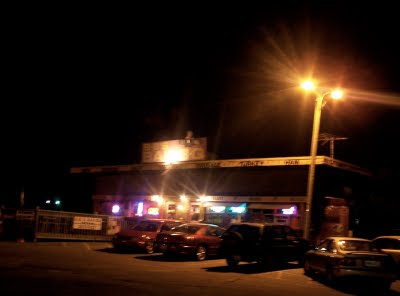 *The proposed giant sign in the Jazz District clears another hurdle. This parody of the signage is neither helpful nor funny. (Latter tip via Tony's Kansas City.)

*Shay Estes checks in with Joe Klopus. The vocalist was also featured on KCUR. (Latter tip via KCJazzLark.)

*Diverse's December 14 gig at The Record Bar will be broadcast live at Ustream.

*The American Jazz Museum is dragged into the post-Buck O'Neil controversy at the Negro Leagues Baseball Museum.

*Tony's Kansas City is quite the Dave Stephens fanboy.

*Ida McBeth is given the once over by KC Confidential.

*Sound samples from the forthcoming Pat Metheny album were briefly posted at Nonesuch's site. The sonics weren't nearly as weird as I had expected. It sounds more or less like "normal" Metheny.

*A very helpful schedule for January's Jazz Winterlude is posted at JCCC's site. The accompanying complete list of performers is also compelling. From a press release: Jazz Winterlude consists of two full days of jazz and a Sunday brunch. Musicians are all local. Festival-goers will hear styles from Dixieland to contemporary and everything in between — swing, big band, bebop and vocal jazz. “Kansas City has a huge cache of wonderful musicians who deserve to be heard by a wide audience in a concert setting,” said Doreen Maronde, festival organizer.

*From David Basse: If you’re looking for a way to jazz up your holiday spirit, join KPR for a night of holiday standards with a jazzy beat at the Liberty Hall-iday Boogie. Bring your mistletoe and dancing shoes. Kansas Public Radio will present David Basse, OJT and special guests Pearl McDonald, Nedra Dixon and Kim Park in concert Saturday, Dec. 12, 8 p.m., at Liberty Hall in Lawrence.

(Original image by Plastic Sax.)
Posted by Happy In Bag at 9:08 AM

I went. I looked. But I could not listen. Guess I'll have to wait to hear Mr. Metheny's Orchestrion.

I don't know why they don't want people to hear it, UL. Their artist roster makes Nonesuch my favorite label. I don't, however, care for the way they conduct themselves.