Hermon Mehari: The Plastic Sax Person of the Year 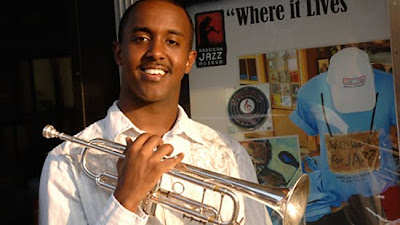 Hermon Mehari is far more than the trumpet player in Diverse. The energy and exuberance he contributed to Kansas City's jazz scene in 2009 make him the obvious choice for Plastic Sax's Person of the Year.

*In an environment permeated with cynicism and negativity (guilty as charged), Mehari's upbeat and optimistic demeanor stands out. While many jazz musicians bemoan their plight, Mehari made his own luck. He demonstrated that hard work and a positive attitude can make great things happen.

*Mehari was interviewed many times in 2009. He never failed to speak highly of UMKC's jazz program and of Kansas City. He's also quick to praise his band mates and other locally-based artists.

*Mehari is one of Kansas City's most visible jazz fans. He doesn't merely attend shows- he drags other along and regularly uploads video footage. He embraces the new technology that allows him to share his passion for jazz with others. Accordingly, Diverse's site is excellent.

*And then there's the music. Mehari probably isn't the most gifted member of Diverse, but his artistic vision and genial persona make him a terrific front man for the group. Diverse's self-titled debut album is quite impressive. And their live performances are even better. Mehari also gigs as a member of the trio Tri-Dimensional and frequently sits in with other acts.

There's no telling what 2010 has in store for Kansas City's jazz scene. Knowing that Mehari will play a part in it, however, makes the outlook for the new year seem that much brighter.

Woah, too kind! Thank you very much, not sure if I deserve but I do appreciate it.
-Hermon

Congrats, Hermon! I'll mention that one of his many interviews was on The Jazz Session:

Excellent choice. You deserve it, Hermon.

Hermon,
Remain humble and be business savvy! Think about "shelf life" as pro. I love the way you play!
Way to go!

well now for all the buzz happy, i'm for sure going to check out diverse's release. heard one tune and an interview on KKFI a few months back and what i heard i liked. must give more serious consideration! - mike t.

I wish I could say I am surprised, but I've known this guy as great musician and a great friend since he was still reppin the JC, not KC, scene back in the day.