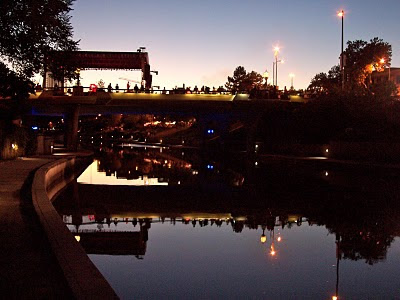 *Hearne Christopher reports that jazz will soon be featured in a revamped space at the downtown AMC movie theater.

*Dave Brubeck's October 14 concert at The Folly Theater has been cancelled. An appearance by Ellis Marsalis on February 11 replaces Brubeck's date in the venue's jazz series.

*The Star offers a review of Saturday's concert by The Bad Plus at The Folly Theater. And There Stands the Glass took notes at Sunday's performance by The Gang Font at The Record Bar.

*Here's an extremely nice segment on Marilyn Maye from Sue Vicory's Kansas City Jazz & Blues: Past, Present & Future. And here's a new trailer for the film. The documentary will be screened tonight, September 29, at B.B.'s Lawnside BBQ.

*UMKC's archival work on the memorabilia of Claude "Fiddler" Williams is noted by Steve Penn.

*Dude Langford is recalled by KCJazzLark.

*The NFL apparently produced a television spot that features a 1947 song by Kansas City's Julia Lee and Her Boyfriends. NPR's A Blog Supreme made the catch.

*Kansas City bassist Jeff Harshbarger seems to fit right in with The Jacob Fred Jazz Odyssey in this gorgeous footage of JFJO collaborating with the Bartlesville Symphony Orchestra. The Oklahoma-based band performs October 9 at Jardine's.

*12th Street Jump resumes Friday at the downtown Marriott with a tribute to Stevie Ray Vaughn.

*The Power & Light District hosts an event titled "The 14th Street Jazz Festival" on October 2. The McFadden Brothers are the only act listed at the "festival."

*Is Geneva Price is the daughter of Priscilla Bowman? A comment "GPrice" made here suggests that it's true. I have an expert investigating the matter, but please leave a comment if you can verify or dismiss this amazing assertion. UPDATE: The expert reports that Geneva is not related to Priscilla. I apologize for the false alarm.

Hearts of Darkness at the Riot Room on Saturday night featuring a late second set with several special guests of high prestige in the jazz community.