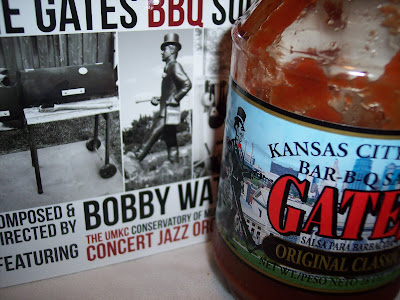 Original Classic. That's the name of the sauce most people reach for while dining at a Gates Bar-B-Q restaurant. It also serves as an apt description of Bobby Watson. The Plastic Sax Person of the Decade has done more than anyone to insure that Kansas City's jazz legacy remains vibrant in the new millennium.

In spite of my profound respect for Watson, I approached the new release The Gates BBQ Suite with trepidation. The concept of a traditional big band album in 2010 didn't appeal to me. I needn't have worried.

All of Watson's compositional gifts, directorial skills and prodigious improvisational talent are brought to bear on the project. While the context is a throwback to The New Testament version of the Count Basie Orchestra and Benny Carter's Further Definitions, it's hardly quaint or old-fashioned. Even if the charts don't betray the influence, the joyous, groove-based sensibility of the album hints that the compositions were designed by a man familiar with the music of Donald Byrd and Ramsey Lewis. The Gates BBQ Suite is as immediately engaging as a good pop album.

Watson's solos are, needless to say, excellent, but he never goes for the jugular. The album is about feel rather than chops. It's also gratifying to hear several members of Diverse on the album. Diverse's rhythm section of Ben Leifer and Ryan Lee shine throughout and trumpeter Herman Mehari solos on the first track.

"Sweet and Mild" is one of two less popular sauces offered at Gates. After a weekend spent enjoying The Gates BBQ Suite, that's precisely how I've come to think of the new album by Kansas City's "Original Classic."

(Original image by Plastic Sax.)
Posted by Happy In Bag at 9:59 AM

You're right, Diverse is awesome.

Can't wait to own a copy of this - Bobby Watson is, for me anyway, the closest thing to "a sure thing" that I know of in the jazz world - in the music world, for that matter. Thanks for your review, BB.

You'll get no argument here, Michael.

I find Bobby Watson's Gates BBQ Suite to be unavoidably charming and the best example of the genesis of what is Kansas City Jazz.

thanks for the review. would like to see you do more of these, but with the plethora of releases on any given day, i'm sure it could be overwhelming.

meanwhile, i'm not a fan of Gates, but the CD is on my list!

(btw... ever hear of Josh Nelson? not totally familiar with his work, but for one song that has me enraptured - "Bhutto's Song."

Another locally-based jazz act recently sent me their new album, Mike. It will eventually be reviewed at Plastic Sax.

Josh Nelson performed at Jardine's earlier this month. I mentioned the gig in my 9/08 post. He also accompanied Sara Gazarek in the same venue last year. The Plastic Sax review was published 3/08/09.

I just listened to the song you mentioned- impressive!

i heard the final minutes of an interview with him last week on KKFI. they closed the segment with that song... first jazz tune i've heard in a long time that gave me goosebumps.