The Sons of Brasil: An Appreciation 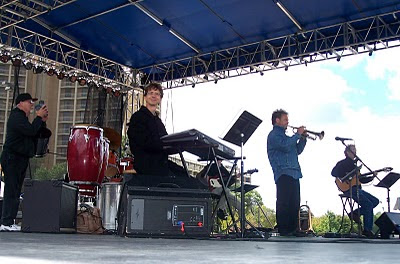 The skies were cloudy and the breeze was chilly as the Sons of Brasil performed Sunday at the Plaza Art Fair. Even so, I managed to acquire a sunburn as I enjoyed the band's ninety-minute set. Such is the power of suggestion. The ensemble momentarily convinced me that I had been transported to a resort in Rio.

I don't know nearly enough about commercial Brazilian jazz to compare the quality of the Sons of Brasil's music to the works of better-known acts like Azymuth. I can state with absolute certainty, however, that there was no other Kansas City-based band I would rather have heard yesterday morning.

The Sons of Brasil can be as pleasant as the breeziest smooth jazz act. But they're not lightweights. The band's members include several of Kansas City's most respected jazz musicians. It's not necessary to appreciate the band, but careful listening is rewarded. Theirs is music that works at every level.

I don't care if it's an indoor gig- the next time I catch the band I'm bringing suntan lotion.

(Original image of the Sons of Brasil by Plastic Sax.)
Posted by Happy In Bag at 12:21 PM

The SOB's are brilliant. KC is lucky to have them!

Dunno if Stan K gets better, or I appreciate him more every year. Maybe both. Whole group is great, and so tight.