Analysis: Jazz in the Woods 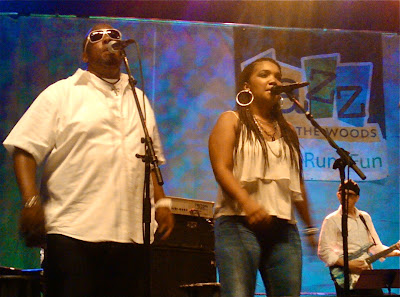 Jonathan Butler, Friday's headliner at Jazz in the Woods, surveyed the vast crowd from the stage and suggested that "over 10,000" people were in attendance.

The free festival is designed to raise money for area charities.  I'm tempted to bemoan the fact that Jazz in the Woods no longer features, you know, "jazz," but there's no arguing with success.  That's why I laughed along with Ian Byrne of The Elders when he joked that his Celtic rock band was performing "Irish jazz" as it opened for the adult urban contemporary Soul of Summer review of Butler, Warren Hill and Maysa.  Besides, I'm rather partial to the Elders and I love singing along to Butler's 1988 pop hit "Sarah Sarah".

I recall when the festival was headlined by founder Vince Bilardo and was held in the parking lot of the nearby strip mall that currently houses Garozzo's.  I also remember that I was able to secure a parking spot within 25 yards of the stage back when Jazz in the Woods featured "real" jazz.  With the notable exception of the acts featured at the free Prairie Village Jazz Festival and at a couple holiday-themed concerts, improvisation-based small jazz ensembles haven't been able to draw audiences of more than 1,000 in Kansas City for at least a decade.

Pouting would be pointless.  Instead, my biggest concern today is that embarrassing video documenting my dancing to Butler's "Mandela Bay" will soon surface.

(Original image of the Soul of Summer's background vocalists by Plastic Sax.)
Posted by Happy In Bag at 11:51 AM

Labels: Jazz In the Woods, jazz is just not all that popular, Prairie Village Jazz Festival, Vince Bilardo

Well, performer selection aside, let me share a positive experience about CWJF.

One of my first experiences hearing live jazz was at the Corporate Woods Jazz Festival. I listened to Pete Eye play with his trio on the main stage in 1997. I was able to go right up to the stage afterwards and have him sign a copy of his CD. Just hearing him playing and talking about music played a huge role in my decision to become a serious musician.

Much the same as TJ, I heard Stan Kessler when I was a high school senior, which was really cool.

Well, I saw the Elders this year which inspired me to go wild and pour beer on peoples heads!

I was also disappointed that "Jazz In The Woods" didn't feature any actual jazz bands.
I find it hard to believe that Karrin Allyson or a really big star like Diana Krall wouldn't be able to draw a big crowd.
I have nothing against The Elders, but they shouldn't bill this as a jazz festival.
Bradley Allen