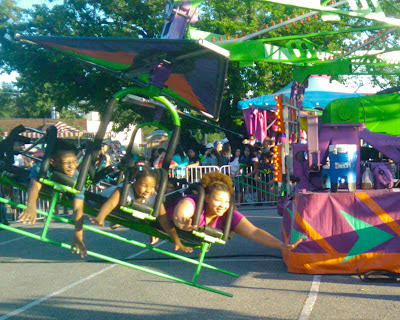 Impressed by one of the monthly appearances of the People's Liberation Big Band of Greater Kansas City at the RecordBar, a prominent musician recently posted a screed at Facebook.  He suggested that he would no longer tolerate any barroom discussions about Kansas City's best bands that didn't automatically place PLBB in the top slot.  Very few locally-based acts working in any genre, he noted, begin to approach the adventurousness, playfulness and musicianship exhibited by PLBB.

I concur.  While I'm smitten by a broad array of Kansas City musicians- including the raucous rap of Tech N9ne, the unforgiving thrash of Hammerlord and the exquisite work of Bach Aria Soloists- PLBB's experimental yet accessible sensibility makes it unique.

The first set at last night's show was no different.  With notables like James Isaac, Matt Otto, Mike Stover and Rich Wheeler in the band, it's a forgone conclusion that the music is going to be imbued with zestful creativity.  Even the subs impressed yesterday.  Andrew Stinson filled in admirably for bassist Jeff Harshbarger while keyboardist Roger Wilder joined the band for the second set in place of the out-of-town bandleader Brad Cox.  Young trombonist Brian Scarborough turned in a fine solo.  In addition to selections by John Zorn and Charles Mingus, the band played memorable original material by Peter Lawless, Otto, Hunter Long, Brad Cox, Patrick Alonzo Conway.

So how is it that the musicians on the stage outnumbered the members of audience as the first song was played?  The audience swelled to about fifty an hour after the band began, but the lack of support accorded to Kansas City's best act is tragic.  I refuse to accept that the assertion that PLBB's repertoire is too challenging.  The music may be difficult, but it's also really fun.  And the venue certainly isn't the problem.  The RecordBar has good food, friendly service and reasonably-priced drinks.

I realize I'm preaching to the choir here at Plastic Sax, but I implore music lovers of all stripes to do themselves a favor by spending $5 to see PLBB at the RecordBar at 8 p.m. on July 1.

(Original unrelated image by Plastic Sax.)
Posted by Happy In Bag at 4:28 PM

I suppose this time there wasn't enough of "Kansas City's top jazz musicians" in the audience for you Happy to make up for the poor turn out?

Funny how you choose to spin that depending on who is playing.

I agree. Playing for and catering to other musicians and critics is short sighted and futile but seems to have become the norm.

People that frequent the Record Bar, myself included, don't exactly have deep pockets and many of us are far left zealots. We'll come if we're on the guest list or can have a free drink that we can nurse.

Having said that, the members of PLBB should be the masters of social media. Maybe Facebook is a collosal (sp) waste of time after all.

"Playing for and catering to other musicians and critics is short sighted and futile but seems to have become the norm."

Bullshit. It depends on what your priorities are to make it short sighted and futile. If being well liked and making money are your goals then it qualifies as futile, but not everybody's in it for that reason.

Much great art throughout history has been unappreciated by popular audiences of the time. Beethoven's Eroica Symphony met with mixed reviews. Was Beethoven shortsighted? He'll be remembered far longer for it.

It's all about motives, and when people automatically assume that musician's only priorities should be being well liked and making money it rubs lots of us the wrong way.

Sometimes, you play for the musicians and critics because they're the ones who are ready to hear and appreciate what you have to say. Must you de-value it by projecting your own shallow "end all be all?"

If it were just about money and pussy I'd be the first person to write fifteen 3 chord songs in two days, throw my drums out of tune on purpose and throw in with the rest of the week's fare at RecordBar.

Much love and respect for RecordBar continuing a Sunday jazz series which I've never seen well attended, yet exists in the spirit of providing an outlet for challenging music.

Some venues recognize art for art's sake and are willing to back it. RecordBar is one of those venues.

The PLBB is actually quite accessible and their presentations in some way, mirror Branford Marsalis' latest discussion on building an audience.

But if you continue to present the PLBB in the Record Bar, you'll continue to draw audiences numbering in the teens replete with left wing zealots like myself who don't wear deodorant and think shampoo is for people.

Art Blakey used to say, "They see you before they hear you."

The PLBB might want to look groomed and clean rather than living on skid row and then present their music in concert venues.

I like the PLBB a lot. The comments of humans can prove depressing.

Nigel - perhaps you are not aware that the PLBB performs in concert-type settings fairly regularly. We performed on the stage of the Kauffman Center last year as part of a tribute to Virgil Thomson, and have presented Brad Cox's adaptation of The Nutcracker during several holiday seasons. Additionally, arts of the band often collaborate with the Owens/Cox Dance Group. Brad Cox works hard to get the band nice shows like this, but the regular RecordBar shows are meant to be a bit more fun and adventurous!

I've been in the band almost two years, and I was their biggest fan for a year or so before that. In that time the audience has grown steadily. Drawing 50 people out on a Sunday night is no small feat around here!

P.S. As the most handsome and well-dressed member of the band ;) I must say I agree Nigel assessment of our look! Would it kill you guys to shave every once in a while?!?!?

Yeah, you guys better get dressed up to play for free.

Keep up the good work PLBB! Excellent product and fun.
Peter....thanks for raising the bar!