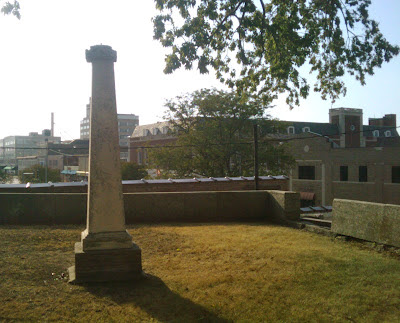 *Darcus Gates, New Jazz Order, Will Matthews, Bobby Waston, Kerry Strayer, JWB and Ron Gutierrez are among the musicians scheduled to appear at the 14th Street Jazz Festival.  The free event is the same day as the Prairie Village Jazz Festival.

*A reviewer doesn't mention jazz in his endorsement of Take Five Coffee.

*People who choose to live that lifestyle should know that Guardian Alien performs Wednesday, August 15, at the RecordBar.

*Comment o' the Week: Anonymous- Are you saying Stan sounds most inspired when muffled?

*Tweet o' the Week: theprojecth- The Pitch didn't even mention us with the rest of the nominees in our category. Thanks Pitch! #pitchmusicawards

*From UMKC Theatre: “Kansas City Swing”- It’s Kansas City in the autumn of 1947 and Jackie Robinson has just integrated major league baseball. The Satchel Paige All-Stars from the Negro Leagues are gearing up to play the Bob Feller All-Stars from the Majors in a thrilling off-season match-up. But there’s a storm brewing. Baseball is about to change, and so is America. Directed by Ricardo Khan, this play is about some of the greatest stars of the Negro Leagues baseball era. It’s about jazz, and about the historic district at 18th and Vine. It’s a snapshot of America in extraordinary times and at the verge of extraordinary change. The show previews April 19 - 23 and runs April 24 – 28 at the Helen F. Spencer Theatre, Olson PAC. (Tip via R.H.)

*From Jim Mair: Auditions for  Kansas City High School All Stars Jazz Ensemble will take place on Wednesday August 29 between 6-9pm in the band room at KCKCC.  Audition material: Play Billies Bounce by Charlie Parker, Improvise in concert F Blues, Play a major scale of your choice full range of your instrument, Sight Reading.  The cost to perform in this group is $90. Payable at the first rehearsal on Wednesday September 5. The ensemble rehearses for ten weeks and will perform one or two concerts.  The director will be Origin recording Artist and ITG Competition winner Hermon Mehari.

How ridiculous to have the 14th St Jazz Festival the SAME DAY as the PV Jazz Festival. Good job Power & Light. Figure it out!!!