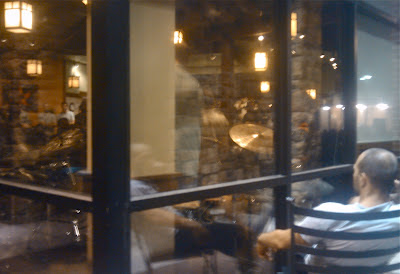 Take Five Coffee + Bar was packed for the second and possibly final performance by Parallax last Thursday.  After standing in the back of the room for thirty minutes, I retreated to the patio.  The outdoor vantage point muffled Stan Kessler's horns, Roger Wilder's Fender Rhodes and Bill McKemy's bass, but it allowed me to revel in the dual drums of Ryan Lee and Brian Steever.

Both drummers are extraordinarily accomplished.  Each adds youthful exuberance to the exceptional formal training they received at UMKC.  Hearing the joyous interplay of Lee and Steever on the eve of Lee's departure to New Mexico was bittersweet.

Kessler, an energetic raconteur, works in variety of contexts every week.  Yet I can't recall him ever sounding more inspired than he did fronting Parallax.  Propelled by McKemy's sousaphone, the funky strut of "Make a Hole" was my favorite piece.  And the fascinating "Sky Watcher" offered the sort of progressive jazz that's too rarely heard in Kansas City venues.

Although Lee will be sorely missed, it'd be a shame if Parallax disbanded after just two performances. Here's hoping that Kessler finds a way to maintain a Lee-less version of the group.

(Original image by Plastic Sax.)
Posted by Happy In Bag at 1:08 PM

There's no shortage of talented drummers in KC. I've always liked Mike Warren's playing (to mention just one). If Stan wants to keep it going, I'm sure he can find a suitable replacement.

Are you saying Stan sounds most inspired when muffled?