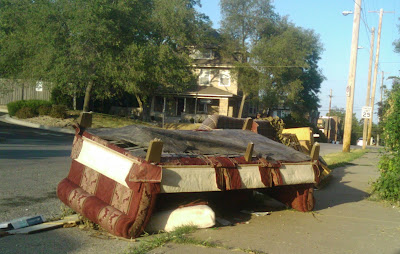 *Kevin Mahogany is featured on the Pace Report.

*Chris Burnett considers the concept of competitiveness.  He also cites KC Youth Jazz as an positive indicator of jazz's future.

*Lee Langston, an R&B artist who performs frequently at the Blue Room, is the subject on an excellent feature on KCUR's KC Currents.

*Bobby Watson received another positive review from a jazz critic in London.

*Gigs by Pat Metheny's Unity Band and Harold O'Neal were previewed by the New York Times.

*The Kansas City Jazz Calendar has been updated.  It looks thinner than usual in part because Kansas City's best jazz club is one of several venues that have yet to publish dates for August.

*Comment o' the Week: Anonymous- Hey folks, Three givens in Kansas City. KCJO concerts always sell.  Jazz in the WOODS always attracts large audiences.  Tim Whitmer productions have longevity and huge followings.  Get out of your own miopic worlds. Not everything in Kansas City Jazz is a downer.

*From Michael Pagán: Kansas City Youth Jazz organizers in collaboration with Piropos have announced a Dueling Piano Summit to be held Sunday August 19th 2012 at 3:00 PM inside Piropos Piano Bar in Briarcliff. The concert will last two hours. Participating in the event will be four of the Kansas City region’s premier jazz pianists – Roger Wilder, Joe Cartwright, Michael Pagán, and Bram Wijnands. The pianists will match up in different combinations and play two-piano jazz for approximately two hours. Proceeds will benefit Kansas City Youth Jazz...

Okay, I'll bite. What do you think is KC's best jazz club?

The Blue Room, in part for moments like this.

I saw BR gigs on your schedule and they are also listed in JAM.

Here's the Blue Room's calendar. As of this moment, it only shows last month's dates. A handful of musicians email me their gigs.

We keep the Blue Room events posted several months out and use the All About Jazz portal for that, linking to that calendar from the AJM site. The following text can be found on the AmericanJazzMuseum.org site.
- - -
COURTESY OF ALL ABOUT JAZZ - GET THE ENTIRE BLUE ROOM SCHEDULE here.

Thanks for the link, Chris.

what the HELL is with all these photos you post? Also, please, enough with this Unity Band stuff already. Cheers.

Tim Whitmer hosted a concert tonight featuring two saxophonists and a cookin' band. It was a fine show! About 300 people were there and we paid $7 a pop to get in. A few young people like myself were in attendance.

I love Bill's photos. The couch - very nice Bill. There are some Lee Friedlander images up at the Nelson you may dig.

Anonymous, get a life. Love Bill's blogging/pix too.

The Dueling Piano Summit (Piropos Piano Bar this Sunday August 19th) to benefit Kansas City Youth Jazz has sold out. Next time, a larger venue &/or multiple shows. Thanks to all!