Review: Jazz in the Weeds 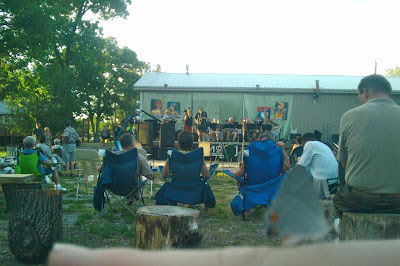 Jazz in the Weeds was cool.  Literally.  The temperature at the "pop-up" festival was at least ten degrees less than it was in Kansas City's central districts on Saturday.

The event was staged in the back of large lot behind a storage shed/barn near a lovely house.  The shaded grounds included free-range poultry and a goat pen.  Delightful!  A ten dollar donation came with tokens for a complimentary water and hotdog.  About sixty people enjoyed the excellent sound and relaxed ambience.

I took in two performances in the ninety minutes I spent at the nifty event.  The Moon City Big Band is a fine kicks ensemble. One member graduated from high school two months ago while another is pushing 70.  Killer Strayhorn's winning set reminded me that the band is probably the closest thing Kansas City has to an act that embraces the sensibility of the ECM label.  (Plastic Sax's reviews of all three Killer Strayhorn albums are here).

I hope that the organizers of Jazz in the Weeds are willing to give it another go.  Kansas City desperately needs additional forums for jazz.  Besides, I'm eager to return to the spot that's seemingly exempt from this summer's heat wave.

(Original image of the Moon City Big Band and my tiny butterfly/moth friend by Plastic Sax.)
Posted by Happy In Bag at 2:41 PM

Tim Whitmer produced a jazz event Sunday that made money and had 1000 people in attendance. Tickets were 15 bucks a piece. Congrats Mr. Whitmer.

I was there. "Killer" show!!
Cartwright and Devan were on fire. Whitmer was the gracious host and glue that brought out the best in everybody!

Get out of your own miopic worlds. Not everything in Kansas City Jazz is a downer.

Fucking priceless. "Thanks for playing" I love all of this.

I'm not being sarcastic. It brings me great joy.