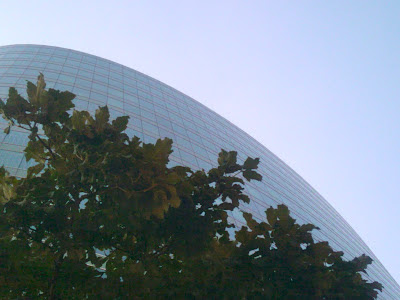 *Book of Gaia was featured on KCUR's Central Standard program.

*Esperanza Spalding, the woman referred to as "The Future" in the Plastic Sax offices, will perform at Helzberg Hall on October 9.

*Kansas City's jazz clubs are reexamined by KCJazzLark.  Kansas City's most prominent blogger takes exception to KCJazzLark's optimism, suggesting that "nothing is going to revive the dead corpse of Kansas City jazz."

*"(F)*ck New York, look at the sh*t thats going on in KC," Phonologotronic asserts as he promotes an August 3 performance titled Fluid Fractures.

*Someone snuck a camera into a Black House Improvisors Collective rehearsal.

*Chris Mills' describes a recent performance by Nicolay & the Hot at Nights at the Blue Room.  Here's fan footage of the show.

*Ernestine Anderson is among the performers at the annual Charlie Parker Festival.  Alas, Kansas Citians must travel to New York to attend.

*All of Joe Dimino's Neon Jazz programs are available as audio streams.  The most recent episode opens with the Ben Kynard composition "Red Top."

*Comment o' the Week: "Kenny G"- If you think PLBB has or ever had a "manager", clearly you've never been to one of their shows.

*An amusing debate is raging in the comment section the Plastic Sax review of the new Music for Owen/Cox Dance Group, Vol. 1 album.

*From Michael Pagán: The second installment of the "Jazz In The Weeds" festival is Saturday, July 28, at 7607 E. 65th St., KCMO 64113.  The Michael Pagán Quartet featuring bassist Bob Bowman serve as headliners.

(Original image by Plastic Sax.)
Posted by Happy In Bag at 1:07 PM