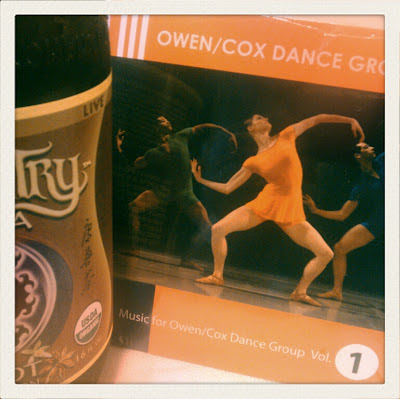 The People's Liberation Big Band is arguably the best musical ensemble in Kansas City.  Although it's substantially less popular than Hearts of Darkness, Tech N9ne or the Kansas City Symphony, the band invests an incomparable level of sonic creativity and reckless joy into each of its frequent performances.  That's why a new album with only one track featuring PLBB is noteworthy to fans of adventurous jazz.

"12 Miniature Blues," the first of three selections on the 2012 release Music for Owen/Cox Dance Group, Vol. 1, contains most of the elements that make PLBB so appealing.  The freewheeling composition is filled with surprises, humor and wondrous waves of sound.  It manages to be entirely original even as it references Thelonious Monk.

Accordion and drums are the sole instruments on PLBB bandleader Brad Cox's "Shenker's Last Stand."  The rendering resembles jazz accordionist Richard Galliano less than it does the artier works of Astor Piazzola.

To paraphrase a vulgar saying, "Hong Kong Audio Diary" is a 25-minute mind-mess.  Loud, abrasive and freaky, the sound collage includes contributions from a a few members of PLBB along with prominent Kansas City musicians including Beau Bledsoe and Gregory Sandomirsky.  As if Cox is using a remote control rather than a conductor's wand, the piece wobbles from blasts of feedback to Chinese folk  to lounge music to Mars Volta-style prog-rock.  The disorienting piece might be too extreme for even the most open-minded fans of experimental film composers like Ennio Morricone.

Music for Owen/Cox Dance Group, Vol. 1 may not have much of a beat, but the members of the Owen/Cox collective can dance to it.

(Original image by Plastic Sax.)
Posted by Happy In Bag at 3:56 PM

I remember the first time Brad played me some samples from "Hong Kong Audio Diary". My first reaction was "Oh man, Brad has finally lost it." but the more I listened the more I loved it. It's my favorite work of his and I actually listen to the whole thing at least once a month. Brad always brings me charts that hurt my brain and make me grow as an artist.

Hey happy,
How can you recognize the superior musicianship of Bobby Watson and Matt Otto but then call the PLBB "arguably the best ensemble in the city"

Thats like saying the best three soprano saxophonists to ever play the instrument are Trane, Branford and Kenny G.

You lose any kind of credibility when you make bone head assessments like that.

Bobby is a fan and Matt is a member of PLBB. -Kenny G

And let's not forget, Happy is their manager.

I'm out of the jazz management business, Mitt. Besides, I was once associated with a different entity- never with PLBB.

If you think PLBB has or ever had a "manager", clearly you've never been to one of their shows. -Kenny G

What do you have against the PLBB Sid?

Nothing against PLBB, but many of them lack a strong foundation built on the mastery of fundamentals and particulars....similar to many avant garde musicians.

Master the language of music and then create.
Don't create because you lack the discipline to master the fundamentals.

Wow, I honestly don't know what to say to that.

My guess is you made that willfully ignorant and insulting statement on purpose, in order to inflame others to lob attacks at you.

I'm pretty sure you know full well that all of the players in PLBB are accomplished in one way or another.

Thanks for using the internet to mastur-hate.

Below is a list of some of the other projects, besides PLBB, that these fundamentally unsound players are apart of.

+1 Brad Cox! Man, that's a great album - It's been in my car player for a while now... amazing writting and playing all around.

Thanks for the review! Sure appreciate all your coverage of KC music, both here at this blog and elsewhere.

Fun comments. Sid clearly does not appreciate some of PLBB’s aesthetic choices, which is, of course, 100% fine. Naturally, I take exception with his conclusion that because he does not like the sound of the band, the individual musicianship and personal discipline of the band members must be lacking.

No hard feelings, Sid. Personally, I love your thing. Your version of “My Way” is a long time fav. When that recording got licensed for “Goodfellas” you must have made a killing. (oops, poor choice of words--sorry, Sid)