Review: Shades of Jade at The Brick 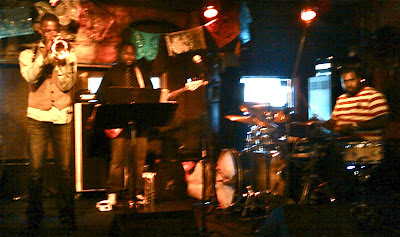 Recent releases by Robert Glasper, Christian Scott and Esperanza Spalding are among the albums I've listened to most in 2012.  When I attend performances by jazz musicians, however, I rarely hear anything that remotely resembles the sounds made by the trendsetting musicians of today.  Most Kansas City-based artists work in styles that are steadfastly rooted in the '40s, '50s and '60s.  I love that stuff, but I often pine for live performances of current jazz.

That's why I flipped my lid when bandleader Josh Williams introduced the second selection I heard Shades of Jade play at The Brick on August 11.

"According to Eddie (Moore), if you don't know who Robert Glasper is, you're living under a rock," Williams said.

As the quartet wound through a creative arrangement of Glasper's new song "Gonna Be Alright (F.T.B.)," I knew that everything was truly up to date in Kansas City.  I also began kicking myself for not previously catching Shades of Jade. I'd heard three members of the quartet in other contexts plenty of times.  Williams, trumpet and flugelhorn, works a lot.  Bassist Dominique Sanders is one of the scene's young stars.  Keyboardist Eddie Moore is often seen in conventional jazz bands and he plays an integral role in plenty of hip hop shows.  Only drummer Julian Goff has flown under my radar.

Energetic and fearless, Shades of Jade reminds me of Diverse in 2009.  There's no reason to believe that the members of Shades of Jade won't achieve a similar level of renown.

(Original image by Plastic Sax.)
Posted by Happy In Bag at 12:33 PM

I was there that show was awesome.