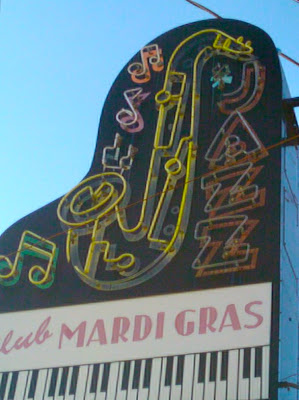 *KCJazzLark hauls out heavy artillery- two previously unreleased live tracks by Jay McShann- in an adamant retort to this Plastic Sax post.  My friend knows that I'm deeply devoted to McShann.  For the record, I stand by my assertion that "(s)wing-based jazz will never die, but I expect it to take a permanent seat next to Dixieland on the cultural sidelines by 2042."

*A lengthy essay by Bob McWilliams praises the efforts of Take Five Coffee + Bar and the Blue Room.

*Pat Metheny was voted "Guitarist of the Year" in the 2012 DownBeat Readers Poll.

*Bobby Watson is the subject of an interesting interview in a Pennsylvania newspaper.

*A video documents the construction of the Folly Theater's new signage.

*A stammering buffoon extolled the virtues of Pat Metheny, Deborah Brown and The Project H on KCUR's Up to Date last week.  The show about Kanas City's music scene is available as a stream or as a download.

*Comment o' the Week: Matt Leifer- As to anon's comment and the responses to it...  I think it's safe to say that the primary base of readers of this blog are A) musicians or B) jazz fans, most of whom fall in to that born before 1960 category. Aside from the fact that it's obviously not the opinion of someone who would belong to category B, people born before 1960 have higher standards of grammar and generally present themselves in a more educated way.  So, since I would put money on Anon being a musician of some sort I'd deduce that either 1) everybody just was trolled, hard, or...  2) Anon is a musician, and a plebe, destined to continue on a course of musical mediocrity until he either dies or gives it up. (The former, if we're lucky.) Now, I'm not saying that musicians that don't play jazz are plebes, I'm saying that musicians who don't RESPECT jazz are destined for f***ing failure. Whatever musical path someone is on, I don't think there's anyone worth a god damn who doesn't at least accept its validity and importance, whether or not they choose to be a practitioner of it. If you are that musically shallow and narrow minded, your music is going to suck.  I'm going to go with troll, however.

*From AfterGroove: Some of you may not be aware, but we lost our good friend (& drummer) Quinton McDonnell to cancer in August. We have planned a fund raiser/celebration event on what would have been his 46th birthday at Aftershock Bar & Grill. AfterGroove will be performing with the various great musicians who have had the opportunity to play with Quinton throughout the years. It will be an exciting evening with LOTS of great music. There will be a $5 cover and we will also be selling raffle tickets for $5 each. We have $1000.00 worth of merchandise donated by various businesses. So your odds of winning are extremely good! The lose of Quinton has left his family in a very bad financial position. Please come out and support the cause. (November 18, 5-8 p.m.)

*From Jim Mair: A full house stood and applauded the Bram Wijnands Trio long and loud at Kansas City Kansas Community College Thursday.  The second in a “Jazz by the Lake” noon concert jazz series held the first Thursday of the month, the performance drew a standing room only crowd in the College’s Conference Center adjacent to the campus lake… The Joe Cartwright Trio will be featured in the third concert of the series from noon-1 p.m. on Thursday, Dec. 6. The 2013 schedule will feature Diverse Feb. 5, Chris Hazelton and Friends March 7 and Tim Whitmer April 4.

(Original image by Plastic Sax.)
Posted by Happy In Bag at 9:05 AM