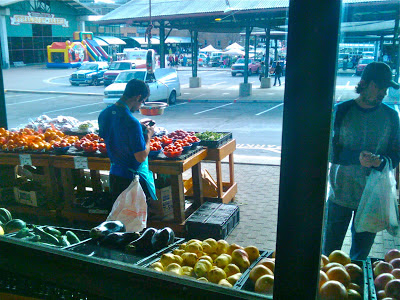 *The Baker Jazz Festival in Baldwin City, Kansas, is this weekend.

*You're in luck if you've been hankering to hear a robot read the Wikipedia entry about Kansas City jazz.

*Comment o' the Week:  Low Rider- Charisma is an important ingredient to any top tier performer. Depending on how you define the word of course. Is charisma in the eye of the beholder.  Diana Krall has a lot more charisma then Dee Dee. Dee Dee is hard to watch. She has these unorthodox mannerisms and gestures that distract from the music. Shirley Horn on the other hand had great charisma. Not what you would call glamorous though.  Karrin's voice has charisma but she looks awkward on the bandstand. Too macho perhaps.She translates better on recordings.  To me, Kurt Elling and Eddie Jefferson have charisma. Eddie had some funky mannerisms but he had an endearing quality. Kevin Mahogany, not so much.  Deborah is a fantastic musician, So is Marilyn Maye.  What separates the "big names" from the not household names?  Please weigh in.

*From Jim Mair: The Kansas City High School Jazz All Stars directed by Hermon Mehari will perform Wednesday November 14 from 7-8pm at Planet Sub at 75th and Quivira.  A Jazz Jam session will take place immediately following their performance until 9:00pm. The jam session is open to any interested high school students. 20% of all sales will benefit the Kansas City High School All Stars program.