I Can Feel Your Energy From Two Planets Away 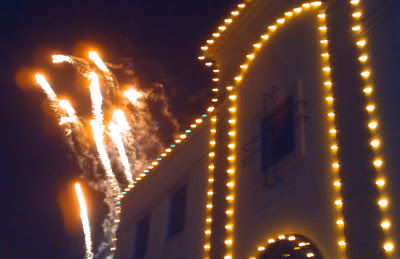 Allow me to begin with an apology.  I acknowledge that the Plastic Sax post of November 19 was ill-advised.

Instead of deleting the post or editing its contents, I'll let it stand as a permanent record of my poor judgement.  My intention was to remind readers that UMKC's Conservatory of Music and Dance- one of Kansas City's most significant cultural assets- regularly offers concerts that are free and open to the public.  I now recognize that I abused the institution's community service.  I hope any students I may have offended use a blogger's misguided opinions as motivation rather than as a roadblock.

While I accept the personal attacks I suffered among the numerous comments left at the post, I can't help but think that part of the animosity is rooted in our shared frustration about the diminished role jazz occupies in Kansas City.  I witnessed another prominent affront last week.

Most everyone from Pittsburgh to Paris associates Kansas City with two things- jazz and barbecue.  If pressed to offer a third hallmark of the Kansas City experience, many would mention the Plaza's holiday lights.   That's why the fact that the annual lighting ceremony on Thanksgiving no longer features jazz seems to epitomize jazz's declining prominence.

Unless I'm mistaken, jazz acts played an integral role in the ceremony until a Glee-style ensemble provided the entertainment in 2011.  Last week The Elders performed before and after the light flip was switched.  The Elders are one of Kansas City's most popular rock-based bands for a reason, but a performance by a jazz band would have been far more inclusive.

Until jazz manages to regain a conspicuous position in Kansas City's cultural landscape, I expect the discourse at Plastic Sax to remain disconcertingly contentious.

So the complaint is now boiling down to the Elders providing the background music for thousands of people not paying attention at the Plaza lighting instead of some jazz group?

I know most J@$$ers are on the leading edge of a bell curve and prone to thinking their feces smell like roses, but goddamn that 1st amendment.

I can't help but think that perhaps I might have appreciated knowing that someone beyond my parents and roommates had attended my combo concert. As all well know, parents are mostly terribly biased in their support.

I am of the opinion that most people just graduated from high school are some of the most sheltered, over-insulated, and self-centered people I have ever met. (Even myself at that age, probably more-so than most) As a result you know what most of them need? A clout to the ear and a contusion to the ego.

Add to this the common practice of parents and teachers praising "talent" over "work" and what do you get? Thin-skinned youngsters who won't try things outside of their comfort zone for fear of looking foolish or experiencing failure.

Guess what folks, thats what improvising is all about, not fearing failure. And if you fail, which hopefully is more often than not, then f&*@ing learn something from it rather than nurse your boo-boo.

People gang up on me all the time. The most common refrain is "that dude is so lame, he needs to get hisself ina practice room yo" Does it hurt my feelings? Not especially. I either have no idea or a fairly good idea who most of you anonymes are anyway so why should it matter?

Having this conversation (more like typing this monologue) I wonder how many of you will read this, how many will gloss over it, how many will take the chance to make a dig on me, and how many will use their critical faculties to have an open mind. Maybe we can all come out the other side with a changed point of view.

I can't believe the harmless, most likely true comments made about this student recital has cause so much uproar. It sounds to me as if it (the recital) was typical of the many student recitals I have attended and participated in and the comments were pretty mild and not aimed at any identifiable person. If anyone was scarred by this review they should probably look for a different vocation.

Well said Phonologotron. It's been interesting reading the opinions from both sides. I think it's also been a good lesson on how easy it is to unintentionally raise a ruckus.

Note to Bill... can we move on to a different thread now? I'm in the mood for some live local music. Maybe some picks or suggestions for the upcoming week?

As far as a "ruckus" (or rucki, if there was more than one happening here) - we always need more of that type stuff in jazz.

Makes things interesting when the creative types have an individual opinion. Such is where the music comes from anyway, isn't it?

Russell, I think you over-estimate how much interest the Plastic Sax readership or jazz community at large takes in your commentary.

and yet you responded. by far the best thing to do would be to ignore me, otherwise its just encouragement for more continued bad behavior.

I guess you're right. How...um, diabolical?

meh.. we all do this purely for Bill's amusement anyway. mobs!! pitchforks!!! angry noises!!!

I'm kind of late on this, but I don't think there's anything wrong with the idea of writing about a student performance, and there wasn't anything out-of-bounds in this specific piece, either.
You went to the event and reported on what you saw and heard, without rancor, personal attacks, etc. I'm OK with the idea of not singling out particular individuals, because there are different criteria for evaluating students and professionals. But the idea that that the whole performance ought be to exempt from any critical evaluation at all seems a bit much.
Readers may disagree with the specific opinions you've expressed, but this clearly was not a "hit job," just routine journalism (in the positive sense of the word "routine").