Funkin' for the Thrill: An Initial Look at the 18th and Vine Jazz and Blues Festival 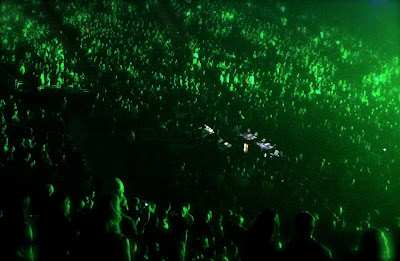 In the immortal words of James Brown, the 18th and Vine Jazz and Blues Festival promises to be "a funky good time."  The five headliners for the October 12 event were revealed last week.  George Duke and Con Funk Shun, the two top-billed artists, are longtime funkateers.

Duke is best known for funk and disco classics like "Dukey Stick", "Reach For It" and "Funkin' for the Thrill".  His new album DreamWeaver furthers his groove-oriented legacy.

Duke competed with Con Funk Shun for positioning on the R&B charts in the 1970s.   Con Funk Shun's classics include "Ffun" and "Chase Me".

In spite of memorable singles from the 1960s and 1970s including "He Made a Woman Out of Me", Bettye LaVette never achieved mainstream success.  The soul survivor's frequent performances in Kansas City attest to her enduring power.  The presence of Kelley Hunt, a fixture of the rock and blues scenes in Kansas City and Lawrence, will compliment LaVette.

Wait a minute.  Where's the jazz?  The fifth headliner is a nebulous "Art Blakey Tribute Band."  I hope that it's the grouping of Reggie Workman, Donald Harrison, Brian Lynch, Billy Pierce, Donald Brown and Ralph Peterson.  That band performs the previous night at Yoshi's in San Francisco.

(Original image by Plastic Sax.)
Posted by Happy In Bag at 10:28 AM

Sure miss all the great dialogue we used to have on this blog.
Nigel

Maybe everybody's moved on to Jazz is the Worst, Nigel.

(And if anyone wants to give me a five-minute tutorial on fixing this site's RSS feed, I'd be eternally grateful.)