Book Review- Bird: The Life and Music of Charlie Parker 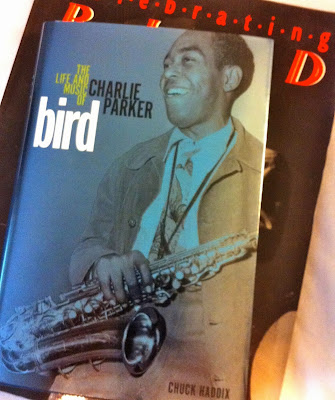 Charlie Parker is a former neighbor.  After reading Bird: The Life and Music of Charlie Parker, the new biography by Chuck Haddix, I think of the Kansas City, Kansas, native less as a jazz legend than as a guy who lived much of his life on the same streets I inhabit.

While living at 3527 Wyandotte in 1927, for instance, Parker walked by the Uptown Theater on his way to school.  As the co-headliner of the Jazz at the Philharmonic tour in 1948, Parker performed successive nights at the Music Hall (whites only) and Municipal Auditorium (integrated audience).

A joint named Tootie's Mayfair at 79th & Wornall hosted Parker during his sporadic Kansas City homecomings.  He also played the El Capitan at 18th & Vine in 1952, a fact I was oblivious to when I frequented the club in the 1980s.  These details- and there are dozens in the book- transformed my perception of Parker's life.

The biography is essential reading for every Kansas City-based jazz fan and for anyone who hopes to fully understand the social, economic and political structure of Kansas City during Parker's life (1920-55).

The fascinating revelations don't end when Parker relocates to New York.  If I'd ever known that Parker once hung out with Albert Einstein and had met Jean-Paul Sartre, I'd forgotten about those odd intersections.  Lay readers may find Haddix's constant litany of Parker's tours, club bookings and recording dates too dry.  For Bird obsessives, however, such details are endlessly fascinating.  Parker's life, of course, is also the story of the relationship between Parker's spectacular genius and what Haddix characterizes as "capricious behavior."  Haddix soberly documents Parker's personal failings.

Parker's artistic significance and complex life can't be conclusively captured in a single volume.  Haddix's thin but rich biography, however, serves as an invaluable contribution to the extensive body of work about Parker.

(Original image by Plastic Sax.)
Posted by Happy In Bag at 1:54 PM

*Parker's artistic significance and complex life can't be conclusively captured in a single volume. Haddix's thin but rich biography, however, serves as an invaluable contribution to the extensive body of work about Parker.*

This book is very important, especially during our times. It is easy to forget what it was like to live in Kansas City and the USA during the time this genius was here. He was a bit older than my parents, who are both gone now. The "greatest generation", he was one of them ... Cb