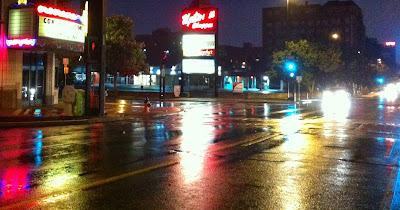 *A set of photos documenting the Prairie Village Jazz Festival was posted by KC Jazz Lark.

*The 9th Inning Sports Bar & Grill, a relatively new establishment a block west of the museum complex in the Jazz District, has closed.  (Link via Tony's Kansas City.)

*Here's the audio of a recent edition of 12th Street Jump's "Blues In the News."

*Comment o' the Week: North KC Evan- 12thStreet Jump puts live KC jazz all over the radio! What other KC jazz ANYTHING reaches that many people on a weekly basis? Find some love...or just respect.

*From a press release: A celebration of the life and music of Charlie Parker with Chuck Haddix discussing his new book “Bird: The Life & Music of Charlie Parker.”  Accompanied by Special Guests Saxophonist Bobby Watson And Trumpeter Hermon Mehari along with Tim Whitmer and an All-Star Band playing the music of Charlie Parker… To musically enhance excerpts of this story, internationally renowned saxophonist Bobby Watson will channel Charlie Parker through his horn… Bobby will be joined by trumpeter and former student, Hermon Mehari and other musical guests… Spirituality & All That Jazz.  Unity Temple on the Plaza.  Wednesday, October 2, 2013. Tickets at the door only - $7.00.

*From the American Jazz Museum: The American Jazz Museum is one of three organizations chosen to benefit from sales of Boulevard Brewery's KC Pils from July 1 through September 30.  Beginning September 20, a ten-day public voting period will determine how the money will be divided, with the top vote getter receiving 60% of available funds and the two runners up each collecting 20%.  The process will repeat every three months, so that 12 worthy organizations will receive funding each year.  Ballots may be cast here.

*From a press release: The Count Basie Orchestra and All That Music Productions, LLC, is pleased to announce the appointment of Scotty Barnhart as the new Director of The Legendary Count Basie Orchestra. He follows Thad Jones, Frank Foster, Grover Mitchell, Bill Hughes, and Dennis Mackrel in leading one of the greatest and most important jazz orchestras in history.  Founded in 1935 by pianist William James Basie (1904-1984), the orchestra still tours the world today and is presently ending a two-week tour in Japan… Mr. Barnhart, born in 1964, is a native of Atlanta, Georgia… He has been a featured trumpet soloist with the Count Basie Orchestra for the last 20 years... His first concert as leader of the orchestra is September 25, 2013 in Atlanta, Georgia at the Cobb Energy Center in a tribute to Count Basie, Ella Fitzgerald, and Joe Williams. Barnhart resides in Los Angeles, California, and Tallahassee, Florida.