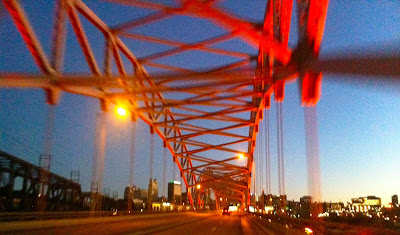 I don't subscribe to the notion of guilty pleasures.  I freely admit my affection for scads of unfashionable music, ranging from the lewd hip-hop of Tech N9ne to the prog-rock of 1970s-era Genesis.

Perhaps no style of music is more out of favor than jazz fusion.  Jazz purists detest it while most of the rock audience pretends the form doesn't exist.  Road Trip, the new album by Dojo, is destined to be ignored by most mainstream outlets.  It's a shame.  Road Trip deserves an audience beyond the habitués of guitar shops.

The ensemble led by the Lawrence-based guitarist Brian Baggett has crafted an album that's both technically masterful and eminently enjoyable.

While rooted in the era in which fusion giants like Allan Holdsworth and Billy Cobham ruled the earth, Road Trip isn't defined by nostalgia.  The influence of metal-oriented bands like Dream Theater and a trace of Metallica-style thrash can be detected in several selections while "In Times Like These" contains electronic bleeps and blurts.

Baggett's work is complimented by a pleasing variety of moods and textures.  Rather than sounding like a series of long guitar solos, each track on the album possesses a unique disposition.  Baggett's solos, while unrepentantly ostentatious, rarely impede the forward momentum of the melodies.  Bassists Chris Handley and Jeff Harshbarger and drummer Luke Stone provide a solid foundation for Baggett's explorations.

Let the cool kids have their fun.  If appreciating Dojo's powerful jazz fusion is wrong, I don't want to be right.