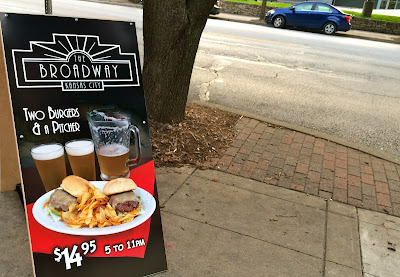 The live music venue at 3601 Broadway is the source of the worst news and the best news on Kansas City’s jazz scene in the first half of 2015.

The Broadway Jazz Club was temporarily shuttered about 17 months after it opened.

The awful news was offset by the enormously encouraging report that John Scott, the proprietor of the Green Lady Lounge jazz club, would operate an overhauled version of the room.

My visit to the revamped location at 3601 Broadway last Thursday revealed welcome improvements.

Now named Broadway Kansas City, the venue offered expert service.  The dim lighting that sets the mood at the Green Lady Lounge is now matched by the darkness at Broadway Kansas City.  I had to use the flashlight on my phone to ascertain the denominations of the bills in my wallet.

About 20 people took in a performance by vocalist Molly Hammer and Ken Lovern.  The duo’s repertoire was heavy on Dinah Washington material and also included renditions of “Never Will I Marry” and “(You Make Me Feel Like) A Natural Woman.”

Lovern is best known as the funky jazz organist for OJT.  He played piano in a cabaret setting on Thursday.  Hammer’s use of an electronic tablet- presumably as a prompt for lyrics- was slightly off-putting.

One thing that hasn’t changed at Broadway Kansas City is the impressive sound system.  The sound is just as rich and crisp in the back of the room as it is a few feet from the stage.

I’m looking forward to taking advantage of the burgers and beer special* at Broadway Kansas City during my next visit.