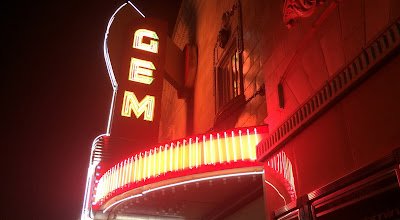 While I was thrilled to serve as the host of a pre-concert talk at the Folly Theater in March, the honor hasn’t softened my unflinching analysis in this installment of Plastic Sax’s annual examination of the bookings at the Folly Jazz Series and the American Jazz Museum’s Jammin’ at the Gem concerts.

Julian Lage Trio
Folly Theater, November 21
My appreciation of Julian Lage’s appearance at the sorely missed Jazz Winterlude festival in 2013 was tempered by the disgruntled murmurings of audience members who didn’t care for Lage’s adventurous explorations.  His concert at the Folly Theater should attract more attentive listeners.
Grade: A-

David Benoit Christmas Tribute to Charlie Brown
Folly Theater, December 18
David Benoit was a star in the smooth jazz radio era.  While his light and melodic approach makes him a logical interpreter of Vince Guaraldi’s seasonal compositions, it’s difficult to muster much enthusiasm for this booking.
Grade: C

Alicia Olatuja
Folly Theater, March 11
Like a young Oleta Adams, the St. Louis native Alicia Olatuja specializes in tasteful, jazz-informed pop.  The appearance by this year’s “Spotlight Artist” in the Folly series promises to be exceedingly pleasant.
Grade: B

Christian McBride Trio
Folly Theater, April 9
While I’d prefer a performance by Christian McBride in a context other than an acoustic trio, April's gig should serve as a master class in tasteful swing.  (Docked a notch because McBride seems to perform in the area every year.)
Grade: B

The Bad Plus Joshua Redman
Gem Theater, April 16
The measly turnout for The Bad Plus’ 2010 concert at the Folly Theater was one of the most disappointing debacles in recent years.  A dearth of area bookings featuring other forward-thinking acts ensued.  The Bad Plus’ new album with the exciting saxophonist Joshua Redman is solid.
Grade: A

The McFadden Brothers & Ida McBeth
Gem Theater, May 21
The McFadden Brothers may be Kansas City’s most undervalued act.  The duo’s Las Vegas-style razzle-dazzle is charming.  Ida McBeth is a local institution.  Even though both artists are fixtures on local entertainment calendars, the musicians are deserving of a “Lifetime Achievement Award Concert."
Grade: B

(Original image by Plastic Sax.)
Posted by Happy In Bag at 4:02 PM