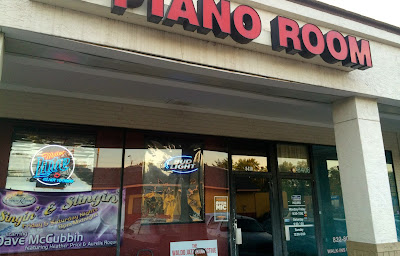 I saw a young couple get carded at the Piano Room last Monday.  That’s a rare sight at venues featuring live jazz (with the exception of the late-night party venue the Mutual Musicians Foundation).

The fresh-faced pair joined a coterie of other twenty-somethings who huddled near the band at the back of the space on Wornall Road.  The remainder of the two dozen customers of the Piano Room were older folks who monitored the Royals game on television or chatted with the sociable bartender.

The kids were listening to their peers in the Waldo Jazz Collective, a group that has received short shrift at Plastic Sax.  Monday’s visit was the first time I had attended the group’s weekly session at the Piano Room.

Some members of the group occasionally appear in more prominent settings.  Baritone saxophonist Aryana Nemati, for instance, has performed for large audiences on the stages of the Gem and Midland theaters.

A set list that included compositions by Duke Ellington and James Brown reflects the band’s eclectic sensibility and the relaxed setting.

(Original image by Plastic Sax.)
Posted by Happy In Bag at 12:32 PM