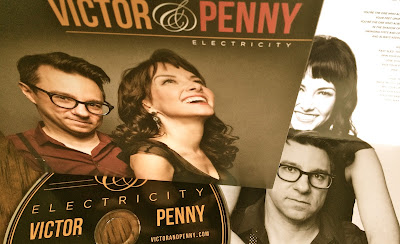 Erin McGrane was one of the most engaging performers in Kansas City as a member of Alacartoona during the previous decade.  Equal parts Cyd Charisse and Eartha Kitt, McGrane played the role of a riveting femme fatale.

She's assumed an entirely different persona as half of the “antique pop” duo Victor & Penny.  The recent release Electricity is by far and away the duo’s best release.

As I suggested in a review of the 2015 album Live at the Living Room Theatre, the bygone premise of Victor & Penny would be intolerably precious if not for the outstanding musicianship of the ensemble.

Electricity indicates that Victor & Penny can hold its own with like-minded acts that have achieved international renown including the Hot Sardines and the Hot Club of Cowtown.

(Original image by Plastic Sax.)
Posted by Happy In Bag at 10:07 AM