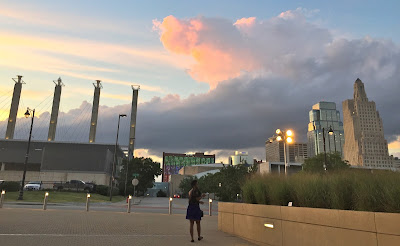 *Joe Klopus revealed the lineups of the 2016-17 seasons of the Folly Theater’s jazz series and the Kansas City Jazz Orchestra.

*Zack Albetta interviewed Ryan Lee for the Working Drummer podcast.  Lee is also featured in a 18-minute promotional video for a new album by the 15-year-old pianist A Bu.

*The Kansas City Star reports that The American, an upscale restaurant that regularly hires jazz musicians, will close at the end of the year.

*The Pitch recommends Bobby Watson’s return to the Blue Room.

*Hermon Mehari uploaded a video of an unaccompanied version of “Ask Me Now” to YouTube last month.

*David Martin considers the stakes in advance of this week’s vote on $27 million in additional funding for the Jazz District.

*Tweet o’ the Week: Eddie Moore- Happy 4th of July, my people still dont have independence but lets blow shit up in hopes for a change. Fireworks i mean.....

*From Chris Burnett: Today is my last official day working at the American Jazz Museum in Kansas City. I started working there as the Marketing Communications Manager in 2011 after a phone call from Greg Carroll, the previous CEO… I am going to take some time to reorient my focus in the arts.

(Original image by Plastic Sax.)
Posted by Happy In Bag at 7:51 AM

With both Cecile McLorin Salvant and Aaron Diehl on the Folly series, I'm hoping for a double-dose of my man and former Kansas City drummer Lawrence Leathers!