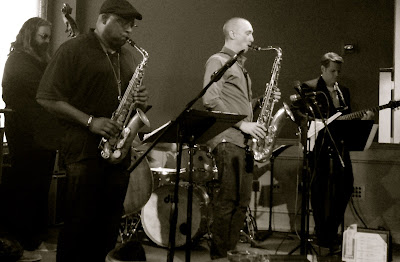 A friend suggested that Kansas City’s jazz scene is in the midst of the summer doldrums during the set break of Matt Otto’s album release show for Soliloquy at the Blue Room last Thursday.  While I didn’t disagree with him, I should have countered that the magnificent performance by Otto’s septet should satiate the members of the audience of about 50 for a few weeks.

My detailed review and audio commentary about Soliloquy are posted here.  Rather than repeat my lavish praise, I’ll share a few additional insights gleaned during the gig that featured the contributions of Gerald Dunn, Shay Estes, Jeff Stocks, T.J. Martley, Jeff Harshbarger and Mike Warren.

*The performance affirmed the strength of Soliloquy’s compositions and arrangements.

*Estes’ wordless vocals and Dunn’s alto sax tone were occasionally indistinguishable from each other.  It’s a nifty trick.

*Relegated to a supporting role on the album, guitarist Stocks’ more prominent playing on Thursday was welcome.

*Otto brings out the best in Dunn.

*One of my kids sampled this festival in Vienna last week, but the superlative quality of Thursday’s free show partly validates my decision to remain in Kansas City. 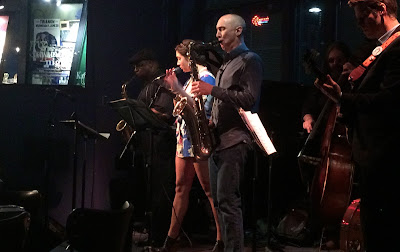 (Original images by Plastic Sax.)
Posted by Happy In Bag at 9:05 AM